From RationalWiki
(Redirected from Red Pill)
Jump to: navigation, search 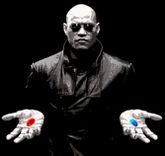 Laurence Fishburne, from his role as Morpheus in The Matrix

The terms red pill and blue pill originated in the film The Matrix (1999). In the film, "taking the red pill" means choosing to break out of the virtual reality dreamworld in which humanity has been imprisoned by their robot overlords, while "taking the blue pill" means remaining a literal slave to the machine. In political contexts, "taking the red pill" has come to mean "waking up" and refusing to be one of the sheeple, which usually involves rejecting accepted science or basic human decency.

Ironically, the original film is an allegory for gender transition, the red pill itself being the decision to come out as trans (referencing estrogen pills, which were red at the time).[1] The Wachowskis, the writers and directors of The Matrix, did in fact undergo gender transition several years after the film was released.[2]

This can specifically refer to: