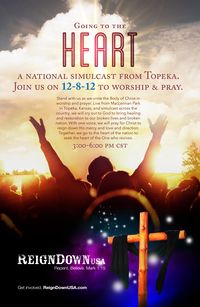 Promotional poster for ReignDown's 2012 gathering. Chop off the bottom third and you'd actually have a pretty decent poster.

ReignDown is an Evangelical Christian worship and prayer gathering, run by the ReignDown USA organization. Notably, their 2012 gathering received an official endorsement from Kansas governor Sam Brownback,[1] who issued a video inviting people to participate in ReignDown's meeting in Topeka, Kansas.[2]

Eyebrow-raising quasi-official government endorsements aside, ReignDown is a run-of-the mill Evangelist organization. Its official blog devotes an entire post to fretting about America not being Godly enough,[3][4] they see the 2010 earthquakes in Haiti and Chile and the 2011 earthquake in Japan as signs that America should repent,[5] and it supports school prayer (endorsing an effort to stage a prayer sit-in at several high schools[6]). That being said, it's relatively apolitical, with nary a mention of abortion, gay marriage, evolution, or the evils of secular humanism in sight.

ReignDown's first gathering was held on 2008 in Washington, D.C., followed by their second on December 2012 in Topeka, Kansas. They spent the first half of 2013 raising money for a May (of that year) meeting in Israel.[7] In the start of May, ReignDown abrubtly announced the Israel meeting would be rescheduled for October 15, 2014.[8] Officially, this is because God appeared to its founder in a dream and dramatically revealed ReignDown's new meeting date.[8] Even a mildly cynical reading suggests they simply hadn't raised enough money in five months to hold a concert in Israel, and so pushed the date out by a generous one and a half years.

The name ReignDown is taken from a supposed promise God made to the organizers to "reign down His blessings and miracles in an unprecedented way."[9] This makes ReignDown not only a pun, but a pun that makes absolutely no sense.[10]

Like many Evangelical Christian organizations, ReignDown has a carefully-managed narrative built around it. Theirs involves a call to (spiritual) arms, miracles, and gratuitous Bible quotes.

According to ReignDown's website, their mission began when God spoke to a housewife named Shawn-Marie Cole in 2005.[9] He told her to bring people together to bring God back into America and repent on behalf of the nation. It specifically mentions Michael W. Smith

and George W. Bush as leading the gathering. This "vision" is an interesting study of how modern Evangelical Christians try to portray their faith (viz propaganda).

God spoke to a lowly, ordinary person — a housewife. This has the immediate appeal of a personal (Christian) God, one who is present in our lives. But, despite God speaking to her and not anybody else, the president of her own nonprofit is her father[11] and its marketing consultant is her brother,[12] — as ex-Christian blogger Libby Anne has observed,[13] this is typical of Evangelical Christian culture: even if something is the woman's idea, it still needs the stamp of approval from the men in her life, and must ultimately be steered by those men.

The people Cole's vision mentioned as leading the nation in repentance also smacks of Evangelical culture. Michael W. Smith was already a popular Christian singer at the time, and then-President George W. Bush was enormously popular with Evangelical Christians. This plays squarely into the existing Evangelical power structure; as Fred Clark would probably say, there isn't a lot of Christ in her vision — rather than radical advocacy of the poor and downtrodden, her vision calls for the powerful to engage in entirely symbolic acts.

ReignDown USA plays up their 2008 meeting as being heralded by divine intervention. The National Park Service announced "tornadoes, heavy rain and winds, and lightning"[9] were going to hit the gathering, but then ReignDown averted the crisis with the power of prayer. They mention this on their website,[9] their blog (which leads the story with the most dramatic vaguely-relevant Bible quote they could think of),[14] and their 2008 annual report.[15] But ultimately, this supposed miracle boils down to "the weather man said it would rain, but then it didn't" — as miracles go, this is pretty weak.

ReignDown is an admittedly small nonprofit. Despite the big talk about leading the nation into repentance and their slick website and promo materials, their event videos don't show a remarkably large crowd[16] and their annual revenue is barely $100,000.[17] (This is almost certainly eaten up by the enormous cost of staging even a small concert.)

Among the many things ReignDown USA asks people to pray for, they also ask that you pray their financial obligations are met,[18] suggesting ReignDown is unaware how nonprofits are supposed to make money. (There is no word yet on whether the IRS considers prayers tax deductible.)