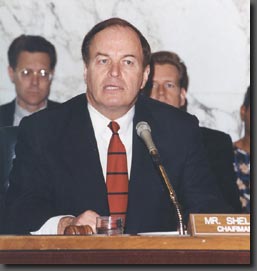 Richard Shelby in full ... something.

Richard Shelby is a United States Senator from Alabama, with most of what that implies. He was a Democrat for most of his early career, up until his second Senate term, but in 1994, he switched parties and became a Republican. Specifically, he made the switch one day after the "Republican Revolution" in the 1994 mid-terms, when the GOP seized control of both chambers of Congress for the first time in 40 years. Convenient timing on that.

While Shelby is not as evil or racist as his former counterpart, Jeff Sessions, he is still a bit of a nativist, sponsoring legislation to make English the official language of the United States. He has also, on at least one occasion, flirted with birther rhetoric,[1] though he later backed away from it.[2]

On the other hand, he only voted to convict Bill Clinton on one of the two ridiculous charges against him, and was one of 8 Senators (the only Republican of the eight) to vote against repealing Glass-Steagall in 1999.

This politicians-related article is a stub.
You can help RationalWiki by expanding it.
Retrieved from "https://rationalwiki.org/w/index.php?title=Richard_Shelby&oldid=1953760"
Categories:
Hidden category: