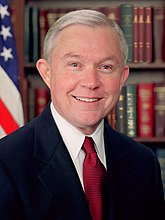 Jefferson Beauregard "Ku Klux Keebler" Sessions III is a former United States Senator from Alabama and U.S. Attorney General under Donald Trump. He was born on December 24, 1946 (before the beginning of the civil rights movement, which explains his racist anti-immigrant[2], conservative views). He asked for the resignation of 46 Obama-era U.S attorneys in 2017.[3]

Basically he's putting the police above the law so that they can railroad and kill anyone they want.[4]

He was fired by Donald Trump on November 7, 2018, right after Democrats won the House in the midterm elections, and temporarily replaced by Matthew Whitaker, his chief of staff.[5] In 2020, Sessions attempted to regain his old Senate seat, but was soundly defeated in the primary election by political newcomer Tommy Tuberville.[6]

As a US Senator, he was a far more reliable "conservative extremist" than his former counterpart, Richard Shelby. When Ronald Reagan wanted to make him a federal judge, a number of witnesses came forward to say that he had made some truly disgusting racist remarks, such as that he thought the Ku Klux Klan was "OK until I found out they smoked pot."[7] Sessions, obviously, is also a proponent of the War on Drugs and said that "good people don't smoke marijuana" on the Senate floor. Racist remarks may be one thing, but deeds are quite another: Sessions basically spent his whole career opposing the Voting Rights Act.[8]

Despite this, he was the head Republican during the Sonia Sotomayor confirmation hearing for the Supreme Court. During his discussion with her, he found an area of agreement (though he ended up voting against her confirmation) in rationalizing drug sentencing guidelines. However, in the Senate, this came out as he and Senator Patrick Leahy were going to "do that crack cocaine thing".[citation needed]

He also says that it is bad that "mentally retarded" people don't have the death penalty.[12]

Attorney General of the United States[edit]

Jeff Sessions was nominated to be Attorney General of the United States in 2017 by the newly elected President Donald Trump. He was confirmed in the Senate by a 47-52 vote, with people voicing concerns over his racial insensitivity and hostility to civil rights.[13] He immediately ushered in a new era at the Department of Justice. He threatened "sanctuary cities" with loss of federal funding and pushed for a policy of "zero tolerance" for people crossing the U.S.-Mexican border illegally.[13] He decried what he considered to be a crime wave spreading across the country when criminologists insisted that incidents of homicide and assault remained at almost historic lows.[13] He ordered federal prosecutors to seek the most stringent penalties against drug criminals in a stark reversal of a bipartisan policy from Barack Obama.[13]

Sessions referred Romans 13 to justify his inhumane policy, supported by Trump, to separate (primarily Hispanic) immigrant children from their parents at the border:[14] In a speech before law enforcement in 2018, he stated:

Sessions was apparently referring to Romans 13:1 ("Let every soul be subject unto the higher powers. For there is no power but of God: the powers that be are ordained of God.") Romans 13 has been used previously both as a justification by British loyalists against the American Revolution and by slave owners to justify slavery,[14][15] but the passage has a longer history as a cover for oppression.[15]

See the main article on this topic: Trump-Russia connection

When Trump fired FBI director James Comey after the latter refused to terminate the ongoing criminal investigation into the former's possible collusion with Russia in the 2016 Presidential election, triggering the appointment of former FBI Director Robert S. Mueller III as Special Counsel, Sessions recused himself, citing a conflict of interest.[13] Thus the responsibility of overseeing the Special Counsel investigation fell to Deputy Attorney General Rod Rosenstein. Sessions maintained that his Department of Justice "will not be improperly influenced by political considerations."[13]

In November 2018, he resigned after being requested by the President, who called him "very weak" and "disgraceful".[5] Trump insisted that Sessions "should have never recused himself."[13] Sessions' chief of staff, Matthew Whitaker, is his acting replacement. Whitaker's responsibilities include the oversight of the ongoing Russia probe. It is still unclear what this means for Rosenstein.[13]