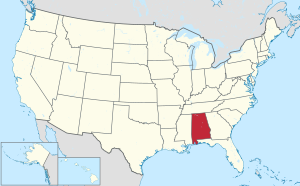 Alabama is in the Deep South.

Alabama is one of many places in the Old South where you can buy a gun quite easily, but the selling of sex toys is illegal. And always will be. Alabamians think sex toys are nasty, but in 2015, Montgomery was the most sexually diseased city in the US.[2] They need a Lawrence v. Texas. You know those old laws, like oranges are illegal every third Tuesday that's a full moon, and sodomy laws that were instated in 1709? Well, Alabama has one: selling guns to kids gets a $500 fine; but a sex toy will get you $10,000 and a year in jail! While the archaic law was eventually challenged, it still remains a law today. The year the archaic law was created? 1998.[3] Nonetheless, many of its inhabitants consider it a sweet home where no one needs Neil Young around.[citation NOT needed]

while seeming race-neutral on the surface.[5]

Something Alabamians probably don't know about the favorite daughter pictured on their state quarter: she was a hard-core socialist, and therefore would likely not be a Republican (at least not if she were alive today), like most of them are. It was also the final state to legalize interracial marriage in 2000.[6]

See the main article on this topic: Libertarian paradise

A state deficit so bad that even the Republican governor suggested they raise taxes.[7] The sad thing is that they'd be pretty well off if they would just raise property taxes closer to what other states charge, but that won't happen because the biggest landowners are the same businesses that control the state.[8]

Oh, and the Ludwig von Mises Institute is based there. Fancy that.[note 1]

Let's see, Supreme Court Chief Justice gets booted from the court (Twice. He got booted twice. That takes dedication.), Speaker of the House indicted for corruption, and the governor is set to face impeachment proceedings next month. Hat trick! O frabjuous day! What savory fruits one-party rule bears![9]

A large majority of Alabamians are Republicans, as are both of the state's senators (Richard Shelby and Tommy Tuberville), and six of the state's seven representatives. The state has not supported a Democratic presidential candidate since 1976, when it voted for Jimmy Carter. In 2017, they narrowly elected the first Democratic Senator from Alabama in a quarter-century. Apparently, wanting to stick your dick in little girls might leave a stain on your opponent's name. Yay! Alabama is not completely insane! Just disproportionately so. Sadly, he was replaced by a guy who couldn't even name the three branches of government, claimed his grandfather fought "to free France from socialism" during WWII, and voted against certifying Joe Biden's win in the Senate, proving that Alabama is still Alabama.

At the state level, politics are also dominated by Republicans, though this is a surprisingly recent development: 2010 was the first time since Reconstruction that both houses of the state legislature were controlled by Republicans. The state elects its judges, and Republicans presently hold every spot on the Alabama Supreme Court, which may explain why that body recently engaged in states' rights grandstanding on the issue of same-sex marriage.[10] Roy Moore may or may not also have something to do with it. Local politics are a bit more of a mixed bag, as many offices are still held by Democrats. It is not uncommon for only one party to field a candidate in many local elections, meaning that the primaries effectively function as elections in many cases. This occasionally has some humorous effects, such as officeholders going full DINO/RINO being miles a bit far off their party's "standard" line.

Alabama ties with South Carolina for 50th in high school performance.[11] (Mississippi: "Hah, see! We're not the worst at everything.") The state also has a system of school vouchers in place[12][13], and the legislature passed a bill allowing charter schools in March 2015.[14] Interestingly enough (and given the privatization efforts described above, disturbingly enough), the state constitution probably contains language disavowing any obligation to provide public education.[15] That constitution also happens to be the longest operative one in the world, longer even than California's.

Christian private schools are inadequately supervised. Alabama’s 'Restoration Youth Academy' acted like a jail including subjecting youngsters to solitary confinement and provided teaching through self teach texts. Those in charge will face trial for child abuse but the law that allowed the travesty is still in place so others could start up.[16]

Humor writer Bill Bryson, in his autobiography The Life and Times of the Thunderbolt Kid, recounts the following story from the August 23rd 1958 issue of the Des Moines Register that is utterly horrifying:

But things are beginning to improve. In 2012, a government panel recommended doing away with a section in state's 1901 constitution requiring separate schools for white and colored children. The group was hopeful they could overcome the opposition that retained the clause in a 2004 statewide vote.[note 4] Sadly, the segregation requirement was kept then too.[note 5] Of course, that clause is inoperative barring a repeal of the Fourteenth Amendment, but Alabamians are strangely fond of completely meaningless reactionary actions, especially those involving small men standing in very large schoolhouse/auditorium doors and delivering (poorly) prepared speeches.