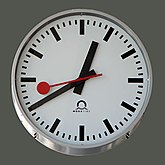 This still clock image has the correct time at 0040 and 1240.
Not to be confused with an Inverse stopped clock moment.

The phrase "stopped clock" (also "broken clock" or "sudden outbreak of common sense"[1]) comes from the proverb "even a stopped clock is right twice a day", thus implying that even cranks, denialists, or conspiracy theorists that are wrong at every other time of the day can theoretically be correct once in a while, especially despite their bad reasoning.

When is a moment a stopped clock?[edit]

Application of stopped clock moments should be careful. It is unreasonable to expect those that have different or even badly-formed ideologies and frameworks to be wrong on every subject. Also, since people change minds all the time, moments of assholes that later take responsibility and apologize are not stopped clock moments. Additionally, two unreasonable opinions that appear to cancel each other out and create a reasonable one are not a stopped clock moment — they are simply two unreasonable statements. One example of this would be a transphobe who claims that "transgender men" should not use the same bathroom as little girls, but is misgendering trans women while simultaneously denying them their rights has not had a stopped clock moment. The two negative views may appear to cancel each other out and create a positive one, but they do not. Finally, any moment where someone displays decency, but such decency originates from a bad framework, is not a stopped clock moment. For instance, a racist can condemn animal cruelty, but the thought is fueled by racism against the Chinese (which in some small provinces raise dogs for food).[2]

The best application for a stopped clock moment would be to illustrate the fallacy fallacy, which is the mistake of assuming that any conclusion derived from fallacious reasoning must be false. A clock stopped at 3:48 will always conclude that the current time is 3:48. Despite its faulty premises, though, this conclusion happens to be correct for two minutes a day, or 1/720 (roughly 0.14%) of the time.

A stopped clock isn't when you agree with someone you'd normally disagree with, but instead when someone who generally spouts harmful, hateful, or just nonsensical views says or does something that is unambiguously beneficial. PETA, a radical animal rights group, isn't a stopped clock because they are vegans (as that is an opinionated assumption), but donating artificial lamb cadavers to Egyptian medical schools to reduce the reliance on actual dead lambs is a stopped clock.[3]