From RationalWiki
Jump to: navigation, search
This law-related article is a stub.
You can help RationalWiki by expanding it. 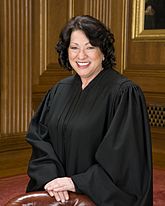 Sonia Sotomayor is an associate justice of the United States Supreme Court. In 2009, Mrs. Sotomayor was nominated by President Obama to fill the vacancy left by Justice David Souter's departure from the Court. Following her confirmation, Mrs. Sotomayor was elevated from the United States Court of Appeals for the Second Circuit, where she had joined in the controversial "reverse discrimination" case of Ricci v. DeStefano.[1] This opinion almost caused many conservatives' brains to explode and Rush Limbaugh and Newt Gingrich called her a racist.

On the more unambiguously wacky side, her senior thesis in college contained some ranting about how she'd supported Puerto Rican independence; to describe this position as fringe is charitable.[2]

Justice Sotomayor is the 3rd woman, and the 1st unambiguous Hispanic (Benjamin Cardozo

, ethnically a Spanish/Portuguese Jew and appointed in 1932, comes first, but labeling him as Hispanic is not universally agreed on) to sit on the Supreme Court.