Supreme Court of the United States

From RationalWiki
(Redirected from Supreme Court)
Jump to: navigation, search 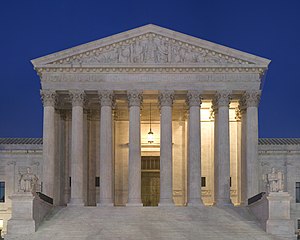 Supreme Court building at dusk.
Not to be confused with the grumpy old Scotsman of the same name.

The Supreme Court of the United States (SCOTUS) consists of judges appointed for life who decide on whether or not local, state, or federal laws comply with the United States Constitution and is the final court of appeals. Supreme Court Justices exercise the power of judicial review, meaning they can uphold or strike down a law, in full or in part, as unconstitutional. This power is not explicitly mentioned in the Constitution, but was established in the 1803 case Marbury v. Madison. Most legal scholars today accept that judicial review is a proper power of the Court.[1]

Although the Court's original jurisdiction is being a trial court, the majority of its most influential decisions come from its function as an appellate court.[1] The Supreme Court also hears lawsuits between the U.S. states,[1] as with the suit by Nebraska and Oklahoma against Colorado's legalization of marijuana in 2014.[2]

SCOTUS hears no more than 100 cases a year. Cases may be brought to the Court after they are appealed from a series of lower courts. In special cases, lawyers can petition for a hearing. The Court's opinions can also create precedents, directing other judges to follow their interpretation in similar cases. On occasion, the Supreme Court may revisit an issue in a new case and and issue a different ruling. Key issues dealt with by the Court in recent years include same-sex marriage, gerrymandering, trade-union fees, and Trump's travel bans.[3]

The members, known as Associate Justices, are appointed by the President, and take office upon confirmation by the Senate. The size of the Court has changed over time and has been manipulated for political purposes. For example, Congress in 1866 reduced the Court to just six Justices in order to prevent President Andrew Johnson from appointing a new one.[1] The last time the Senate voted not to confirm an appointment to the Supreme Court was in 1987 with Robert Bork. Since justices are appointed for life, appointments can become the most lasting legacy of a President. Supreme Court Justices are not covered by the Judicial Conduct and Disability Act of 1980 and may only be removed if impeached and convicted by Congress, but the latter has never happened.[4]

One member, appointed the same way as the other Justices, serves as Chief Justice. Although still only having one vote on cases, the Chief Justice has the power to assign the writing of majority decisions when they are in the majority to one of the associates. If he or she is in the minority, the most senior Justice of the majority shall write the official decision. Opinion drafts circulate among the Justices, who may dissent in full or in part. The final decision serves as precedent and constitutional doctrine, governing the inferior courts.[1]

In practice, the most powerful member of the Court is rarely the Chief Justice, but the one or two "moderate" members who are very often the swing voters on contentious issues. Anthony Kennedy is a recent example of such a judge. (See below.)

Due to the Court's conservative majority, its decisions have been some of the most conservative in decades, and each of the last four Republican Presidents (Reagan, Bush, and Trump) appointed the men responsible for such decisions as Citizens United, the anti-union Janus, Bush v. Gore, Hobby Lobby vs. Burwell, Trump's Muslim Travel Ban, and the striking down of parts of the Voting Rights Act over the past 40 years.[5] The liberal Justices were appointed by the last two Democratic Presidents since 1980 (Clinton and Obama). During Obama's first two years with a Democratic Congress, there were calls for the two remaining Clinton appointees to retire in 2010, in order for Obama to appoint younger replacements.[citation needed] However, this did not happen, giving Donald Trump the chance to appoint at least two justices.

Recently appointed Justices tend to vote together. Sonia Sotomayor and Elena Kagan have agreed 94% of the time while Chief Justice John G. Roberts Jr. and Justice Samuel A. Alito Jr. have agreed 93% of the time. However, this trend falters for Justices who have been on the Court for longer. Ruth Bader Ginsburg and Stephen G. Breyer, nominated by Bill Clinton, agree only 88% of the time. For Antonin Scalia and Anthony M. Kennedy, Ronald Reagan's candidates, that number is 82%.[18]

Before becoming an Associate Justice, Brett Kavanaugh saw the positions advanced in his opinions adopted by the Supreme Court thirteen times and reversed only once.[19] His views on union issues are similar to those held John Roberts, Clarence Thomas, Samuel Alito Jr., and Neil Gorsuch.[20]

In their public appearances, the Justices stress that while the press tend to focus on narrowly divided (and controversial) cases rather than the ones in which the court voted unanimously or nearly unanimously. In fact, the Court is often united.[18] Most Justices work to paint the Court as a nonpartisan, apolitical, and fair institution, rather than an extension of the polarized political environment.[21] The lowest rate of agreement is between Justices Ginsburg and Thomas, at 62%.[22]

Of the US states, 48 have a single court of last resort (called the Court of Appeals in Maryland and New York, the Supreme Judicial Court in Maine and Massachusetts, and the Supreme Court elsewhere). Oklahoma and Texas each have two courts of last resort, a Supreme Court for civil matters and a Court of Criminal Appeals for criminal matters. A state supreme court's interpretation of its state constitution and its state statutory and common law is final and is binding on both lower state courts and all federal courts, including (at least in theory) the Supreme Court of the United States. Federal courts may still adjudicate whether a state's constitution and laws conflict with the U.S. Constitution or federal law.