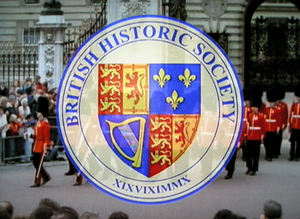 The purported insignia of the "British Historic Society".

The British Historic Society is a name trademarked in November 2010 by TELEbrands, which is used to project authenticity onto a sale of "replica" rings done in a design of the ring given to Catherine Middleton by Prince William. The same ring was also given to Princess Diana by Prince Charles for their engagement. The ads have since been updated to use the less authentic sounding Sterlington Collection, likely to avoid potential lawsuit for false advertising, or fraud.

The "replicas" were originally purported by the sale's page to be composed of a "simulated sapphire", "synthetic diamonds"[1] and "layered in sterling silver". However, the site has since been updated, and the "replicas" are now purported to be composed of a "Faux Ceylon Sapphire", fourteen "Diamond-x4 Cubic Zirconiums [sic]"[2], and "Finished Sterling Silver Plate".

The purported seal for the British Historic Society uses the seal of the royal court of arms for the Kingdom of Great Britain during the years 1707-1714, and the faux Roman numerals "XIXVIXIMMX" in a position that would suggest an establishment date. Since updating the ad the seal only replaces the title of the "Society" to the Sterlington Collection, and uses the slightly less wrong Roman numerals "XIXVIMMX".

The original deceptive name and insignia being used by by TELEbrands suggested a deceptive sales pitch to prey upon the emotional heartstrings of people and their memories of Princess Diana, and the popularity of the British royal family even in the USA. Having since changed the name, they are being less deceptive, but are still selling what is essentially overpriced costume jewelry...