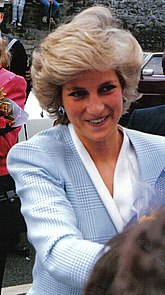 Princess Diana (formally titled "Diana, Princess of Wales, née Lady Diana Spencer, 1961 – 1997) was a member of the British Royal Family and the first wife of Charles, Prince of Wales (they married in 1981 and divorced in 1996).

Diana was "one of colon hydrotherapy's greatest advocates".[1] The Globe quoted her:[2]

She also wore an amethyst crystal given to her by a dowser who used a pendulum to diagnose lead poisoning while watching her on television.[3]

Diana died in a car crash in Paris 31 August 1997. The paparazzi were blamed for causing events that led to the crash, as was her driver Henri Paul, who was believed to be drunk at the time. She almost certainly would have survived the crash had she simply been wearing a seat belt. Her place of death has become a magnet for grief tourism, and her death is considered the impetus for the current craze of it in Europe, with the "outpouring" of grief being unprecedented at the time in the UK.

She has also been the subject of a conspiracy theory that says she was killed by the Royal Family, and MI6 has been repeatedly implicated in the event — with one former agent claiming the incident was similar to other planned assassinations. An SAS assassin has also been blamed.[4][5] Conspiracy nutters focus their attention on a mysterious white Fiat Uno, which apparently struck Diana's car a glancing blow but has never been found; Al-Fayed claimed it belonged to French photojournalist Jean-Paul James Andanson, who died "mysteriously" in 2000, obviously assassinated by someone.[6]

Various motives for murder have been proposed, such as the Royals discovering that Diana was pregnant (both the coroner at the time and subsequent blood tests showed this wasn't the case) or possibly about to marry her boyfriend of the time, Dodi Fayed. As he was a Muslim, such a thing would have been a disgrace (the Royals are more devoutly Christian, or Satanic—well, according to David Icke anyway—than most people realise). Dodi's father, Mohamed Al-Fayed, has been one of the key people keeping the conspiracy wheels turning and the Daily Express front page is stuck in a 1997-shaped time warp. Diana had allegedly claimed that Prince Charles wanted her dead so he could re-marry.[7]

A more likely theory is that, given the number of flowers thrown at her hearse during the funeral, Diana was murdered by florists who wanted to boost sales. Not likely, of course, just more likely.