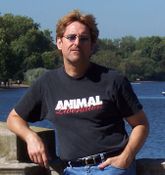 Steven Best is a prominent animal right activist and philosopher. He is the associate professor of philosophy at the University of Texas at El Paso and the co-founder of Institute for Critical Animal Studies (ICAS), an organization which does research related to the animal rights movement and publishes scholarly papers on animal rights. His most famous books are Terrorists or Freedom Fighters? Reflections on the Liberation of Animals and Igniting a Revolution: Voices in Defense of the Earth. Following the expression of a desire to 'wipe [vivisectionists] off the face of the Earth' (a quote he claims was taken out of context), he was banned from the UK, leading him to label the state's actions as those of a 'very fascist ... police state'.[1] Some argue (and this is used in all seriousness) that this is a misapplication of the term fascist.[2]

Steven Best has coined the term "proxy agents" to describe the human beings who are working on behalf of the animals to liberate them from injustices like animal experimentation.

Best coined the term "extensional self-defense," which is a philosophical concept in the animal rights movement. Extensional self-defense refers to the actions which are carried out by human beings on behalf of the animals. The humans working on behalf of the animals are termed "proxy agents" by Best. Best argued animals are "so vulnerable and oppressed they cannot fight back to attack or kill their oppressors,"[3] this is why largely defensive violence of bomb by proxy agents on behalf of animals is justified. Following this logic, Best presumably has no problem with the "oppression" of lions, tigers, and bears (Oh my!), since they can, and do, kill human beings rather easily.

Beliefs and links to extremism[edit]

Even if Best's "vivisectionists" line was taken out of context and he was banned from Britain for no good reason, there is still a virtual L.L. Bean catalogue of instances in his writings and YouTube videos where he advocates the killing of people who, in his opinion, maliciously harm animals; likewise, he has voiced a hard green Pentti Linkola-like desire for the destruction of the entire human race. "Let every motherfucker who shoots animals be shot; Let every motherfucker who poisons animals be injected with a barrel of battery acid; Let every motherfucking vivisector be vivisected and thrown away like the shit they are," he wrote in 2011. "May this upside down world be set right...and the human voice never again be heard."[4] His self-described "fundamental axiom" is this: "If we cannot learn how to live harmoniously on this planet, then we do not deserve to live at all."[5]

In May 2012, Best was linked to Camille Marino, the head of a Florida animal rights group called Negotiation Is Over, which is known for posting how-to arson instructions and personal information on targeted individuals on its website. Marino was arrested on May 2, 2012, at Detroit's Wayne State University after violating a ban from the campus, stemming from her repeated threats of violence against Donal O'Leary, a cardiovascular researcher. This followed Marino's long history of stalking and harassing other research professors. Best was an idol of Marino, and was the senior editor of the NIO website until a short period before her arrest; he posted a viral video on the site of himself threatening a man's wife and young daughter over rumors that he killed feral cats.

Best's relationship with Marino took a bizarre turn by the fall of 2012, when he filed a restraining order claiming that she had stalked and threatened him. The irony of Best's bid to seek police protection—despite openly advocating tactics like Marino's when applied to "vivisectionists", and often viewing the police as an enemy when they protected research scientists from his own threatening behavior—was so delicious that it caused diabetes to spontaneously appear from skeptics everywhere.[6]