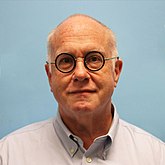 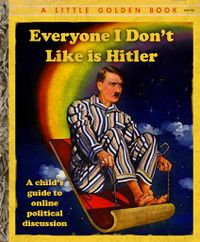 Everyone I Don't Like is Hitler: If only we hadn't all grown up with this book.

When a Hitler or Nazi comparison is made, it may be an extended analogy fallacy.[7]

Godwin's Law does not dispute the validity or otherwise of references or comparison to Hitler or the Nazis. As such a comparison or reference may sometimes be appropriate in a discussion, Godwin has argued that overuse of the Nazi comparison should be avoided as it waters down the impact of any valid usage. In its purest sense, the rule has more to do with completely losing one's sense of proportion rather than just mentioning Nazis specifically.[8][9] The law was initiated as a counter-meme to flippant comparisons to the Nazis, rather than to invoke a complete ban on comparisons. As Godwin himself wrote in 2008:

When I saw the photographs from Abu Ghraib, for example, I understood instantly the connection between the humiliations inflicted there and the ones the Nazis imposed upon death camp inmates — but I am the one person in the world least able to draw attention to that valid comparison.[10]

Godwin himself appears in comments (authenticity confirmed via email) to explain that his "law" sought to discourage frivolous, but not substantive, Nazi analogies and comparisons.[11]

Godwin said in 2017 that it's OK to call the alt-right Nazis, because many of them use Nazi symbols and express support for Nazi ideology.[12] He wrote in 2016:

To be clear: I don't personally believe all rational discourse has ended when Nazis or the Holocaust are invoked. … But I'm pleased that people still use Godwin's Law to force one another to argue more thoughtfully.[12]

Compared to other known blog-based laws, namely Poe's Law, Godwin's Law is quite well known in more mainstream areas.[13] Just to prove it, the law even has its own Wikipedia article.

In 2012, it was added to the Oxford Dictionary,[14] which means that in 500 years' time, it will be reviewed by completely mystified college arts majors.

Russian propaganda has used schizofascism extensively during the 2014 invasion of Crimea, the Russian-sponsored coup attempts in Ukraine, and the Russian-backed insurrection in eastern Ukraine.[15]:145-148 During this time, Russian President Vladimir Putin, head of a regime labeled as crypto-fascist,[16] defined Ukrainian opponents of Russian incursions as fascists.[15]:147 In February 2022, Putin called for the "de-nazification" of Ukraine,[17] just prior to the “special military operation” full-scale invasion of Ukraine in March 2022 in which Putin gave de-nazification as a justification for his war of aggression despite Ukraine's democratically-elected president (Volodymyr Zelenskyy) being ethnically Jewish.[18] Lavrov went further stating, "I could be wrong, but Hitler also had Jewish blood. [That Zelensky is Jewish] means absolutely nothing. Wise Jewish people say that the most ardent anti-Semites are usually Jews."[19]

who has been in leadership positions in self-declared fascistic puppet-states within Moldova (Transnistria, founded in 1990/1991) and within Ukraine (Donetsk People's Republic, founded in 2014), claimed that Russia was at war with fascists who were aligned with an international Freemason conspiracy.[15]:175

Ginni Thomas, wife of US Supreme Court Justice Clarence Thomas, while herself plotting to overturn a democratic election, referred to the "fascist left" and "transsexual fascists".[20]

Another example of a corollary, and an early example, is called "Sircar's Corollary," which is: "If the Usenet discussion touches on homosexuality or Heinlein, Nazis or Hitler are mentioned within three days.”'[9]

A corollary for feminists is:

As an online discussion about sexism continues, the probability of a woman who speaks out being called a feminazi approaches 1.[24]

A number of different Internet laws have been proposed which basically mirror Godwin. Arken's Law states:[25]

The exact history of Arken's Law is debatable,[note 1] but it is claimed that Arken's Law has its roots in the days of HTML 1.0 and earlier (such as Usenet). Any accusations of Big Brotherism, utilizing newspeak, practicing doublethink, thought policing, sending updates down the memory hole, or belonging to the Anti-Sex League would all be invocations of Arken's Law.

Researchers from the University College London attempted to formulate reductio ad Hitlerum into a Bayesian framework, presenting evidence that this is pretty much exactly how people processed the argument:[26]

Before Hitler was a thing, the typical point of comparison for worst person in the world appears to have been the Pharaoh of the Biblical book of Exodus (his identity is uncertain, and he may be fictional, which makes it a weaker rhetorical comparison), although the likes of Judas Iscariot, Pontius Pilate, Oliver Cromwell (for the Irish), Napoleon Bonaparte, and King George III (for Americans), were occasional references.[27] Calling something medieval also seemed to work. However, those don't seem to have been used in an earlier version of Godwin's Law, possibly because the internet did not exist.

Inappropriate Nazi analogies can have the effect of downplaying the Holocaust and other crimes against humanity of the Third Reich. This is particularly the case when the thing being compared to the Holocaust is not only less bad than the Holocaust but entirely unobjectionable.

For example, during the COVID-19 pandemic, many anti-vaccine protesters have taken to wearing yellow stars to protest vaccine mandates. Antivaxx leader Del Bigtree started doing this before the pandemic.[49] As international relations scholar Nicholas Grossman has pointed out, “This is a warped form of Holocaust denial. … [T]he core point, charitably interpreted, is that the Holocaust was public pressure in response to a voluntary choice, when it was actually the industrialized mass murder of millions just for who they were.”[50]

Some, such as author Robert J. Sawyer, have criticized Godwin's Law for implying the Holocaust was sui generis, a unique event that can never happen again. Consequently, he argues, people will be reluctant to issue comparisons for future situations until it is too late, and even if they try, Godwin's Law will be used to falsely shoot them down.[51]

A reverse effect happens when people's views or actions are compared to those of well-known sages or heroes, such as Einstein, Lincoln, etc. The basic idea is that "if you think or do like them, you will be like them". And just like Hitler, they are often the authors of false quotes or the subjects of spurious stories.

While both Hitler[52][53] and Einstein[54][55] adopted a vegetarian diet at some point of their lives, two distinct pieces of information that are conveniently brought up by both proponents and critics of vegetarianism in separate occasions when they see fit, this hardly means you will be as bad as Hitler or as intelligent as Einstein only because you don't eat meat.