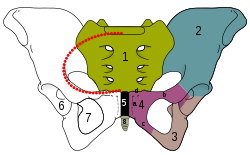 Symphysiotomy (pronounced \sim(p)-fə-zē-ˈät-ə-mē\, SIN-fis-eoh-otah-me) is a type of gynaecological surgery, which during the birth of a baby, the cartridge in a woman's pelvis (area 5 in the picture on the left) is purposefully sawed and then broken apart. This procedure is done so that it helps in the delivery of the child from the mother is giving birth. Naturally, this procedure is only done in extreme circumstances where delivery of the baby become very difficult for the mother. Like all surgeries, especially in all such delicate operations, it can lead to severe complications for the mother.

The procedure of symphysiotomy first came about at the end of the 16th century, as a way to help in childbirth. By the mid-20th-century, the procedure was seen as old-fashioned and dangerous, and obstetricians were switching to much safer Caesarian sections. The only major disadvantage was that women who had Caesareans were more likely not to have any further children, as the operation could damage female's reproductive organs leaving them infertile. [1]

The procedure come in focus when many Irish women who had given birth between the late-1940s to the mid-1980s, discovered that they received this type of surgery against their will and without their consent. Caesareans would have been possible but they could have been seen as a form of contraception. Ireland at the time was very deeply Roman Catholic country, and women were often expected to have large families. Many traditional forms of contraception were banned or near-impossible to get, like the condom and the diaphragm. Absurdly, deeply-Catholic countries like Italy and Spain had no problems in having Caesareans performed despite the infertility worries. [2]

The first push for such use of the symphysiotomy procedure was at National Maternity Hosptial in Dublin, one of the major women's hospitals in the country, under the auspices of the resident obstetrician, Alex Spain in 1946 and was continued by his successor, Arthur Barry. At the time when women's rights were very much unheard of, many women did not know that they had had this, and there were cases of women belittled by the medical establishment while having this. [3]

Nevertheless, some women who had the surgery have suffered later on from severe complications, including permanent diarrhoea and bladder weakness, joint and muscle pain, 'dead legs', unequal leg length, even ironically infertility.

The usage of symphysiotomies was stopped at the National Maternity Hosptial in 1966. Nevertheless, it continued in other hospitals around the country who were mostly managed by the Catholic Church until the end of the 1980s, when Irish women had better social and economic rights due to the booming Irish economy, which encouraged the discontinuation of this. Women were given the necessary Caesarians which were much safer. When the scandal broke out in the 2010s, the Irish government swept it much under the carpet and tried to put the blame on the medical establishment at the time.[4]