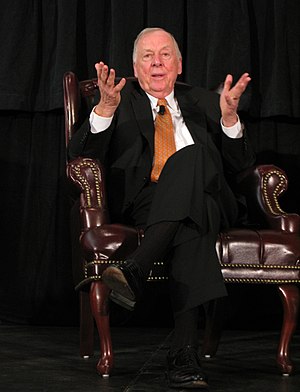 No relation to Slim.

Thomas Boone Pickens, Jr. is the chairman of the hedge fund BP Capital Management (no relation to that BP

), and a major corporate raider from the 1980s, known for putting many small oil companies out of business. In recent years he has become a major proponent of peak oil theory, and called for increased utilization of nuclear energy and natural gas as energy sources. His "Pickens Plan" calls for the nation to reduce dependency on natural gas as a source for electricity, switching to wind power, so that the natural gas can then be used for transportation.

On the sleazier side, it should be noted that he supported the Swift Boat Veterans for Truth, and is a major investor in wind power, meaning his plan may be a bit self-serving. Still, he's one of the saner Republicans to have a RationalWiki page written about him.

This politics-related article is a stub.
You can help RationalWiki by expanding it.
Retrieved from "https://rationalwiki.org/w/index.php?title=T._Boone_Pickens&oldid=2259271"
Categories:
Hidden category: