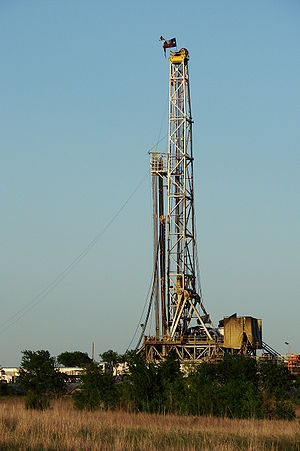 Natural gas is found in association with oil and coal deposits. It is primarily methane with small amounts of other hydrocarbons. It is usually refined to give almost pure methane (CH4) prior to use as a fuel or chemical feedstock. If used as a fuel, it is given a characteristic odor for safety reasons.[1]

There are two ways by which natural gas is produced subterraneally:

Having a lower density than oil or water, natural gas will rise within the Earth's crust until stopped by an impermeable layer. Thus, it is often found in "domes" above oil deposits. The pressure of the gas under these conditions may be considerable.

Natural gas is transported either using tankers, in a liquified form by cooling and using high pressures, for international and large distances; or via pipelines directly to the end user. It is used in electrical power stations, or as a compressed gas for use in vehicles and as fuel for ovens and stoves. For household use, natural gas has almost entirely replaced the use of "coal gas" (produced by heating coal) as it manages to be more efficient and cleaner burning. Another flammable gas that has almost entirely been replaced by natural gas is "city gas", a mixture of (mostly) Carbon monoxide and Hydrogen that is produced by letting water vapor stream over hot coals and thus making them react. As Carbon monoxide is highly toxic (not to mention explosive in certain concentrations) but difficult to detect, there were obvious downsides to "city gas".

Methane is a "clean burning" gas, in that it produces only carbon dioxide and water when burnt with sufficient oxygen and waste gases are generally free of toxic elements such as excess carbon monoxide, or worse, sulfur oxides. As an alternative to burning coal or oil, it produces less pollution. However, by virtue of it still being a fossil fuel, it is still a source of CO2, a well-known greenhouse gas, although it produces less of the gas per unit of energy produced than other fuels. Methane itself is also a greenhouse gas, approximately 24 times more powerful per mole than CO2.

"Fugitive" emissions during the extraction process may also offset much of the benefit of natural gas, as a study by the National Center for Atmospheric Research concluded.[2]

Russia is one of the main producers of the natural gas used in Europe, and most European countries get all or most of their natural gas from Russia. This poses obvious national security and geostrategic questions - and compare the alternatives: loading up massive ocean-going tankers in resource-rich micro-nations like Qatar or Brunei, or annexing the remote Russian Arctic and setting up a pliable micro-nation there as a strategic resource. A further problem stems from delivery-mechanisms - Russia exports gas mostly via pipelines that pass through countries like Ukraine or Belarus, which in the past have often hindered the free passing of gas to countries further west for domestic political reasons. One potential solution for such restrictions involves the construction of new pipelines, bypassing those countries, but as seen from the very hostile reaction of the Polish press ("a second Hitler-Stalin pact") and of the U.S. government to a proposed underwater pipeline linking Germany and Russia while bypassing Poland,[3] those are not without problems either. 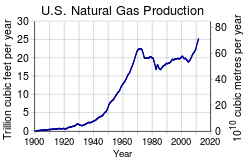 What the frack is going on with all this fracking going on...
See the main article on this topic: hydraulic fracturing

The United States has vast reserves of natural gas, which has led to a shift to its use.[4] Critics in that country rightly point out that this will still be a stopgap maneuver, serving only until the natural gas runs out, and further that the funds spent on developing the infrastructure necessary to extract, move, and use the gas might be better spent on renewable resources. But it seems as though any path towards energy independence in America, an important goal for many, will involve the use of natural gas in some context, at least in those areas where it is locally available.