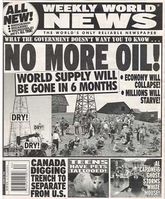 The Weekly World News tells all!

The phrase "peak oil" refers to the prediction that levels of world oil production (i.e., extraction from the Earth) roughly reflect the shape of a bell curve

and will drop off at around the point where 50% of the world oil supply has been used, even as demand for petroleum and its derivatives continues to increase. At the point where production drops while demand continues to increase, then significant economic disruption may occur while the world goes into headless-chicken mode whilst panicking for an alternative energy-source.[2] In the most extreme interpretations, all manner of societal disruptions may occur, including, but not limited to: famine, economic collapse, and ecological collapse. One is advised to hoard canned tuna and ammo just in case.

The idea of peak-oil production is based on the earlier "Hubbert's Peak theory,"

developed in 1956 by M. King Hubbert, a Shell Oil geoscientist, who used this same concept in an attempt to predict a point at which United States oil production would drop. Hubbert predicted 1965 as the most likely time and 1970 as an optimistic scenario. In fact, U.S. oil production actually peaked in the early 1970s, either contradicting his prediction in some people's views, or making it just slightly pessimistic.

In most cases, the phrase "peak oil" refers to more than the fact that petroleum is a finite resource; no-one (except a few cranks like those who adhere to the Soviet concept of abiotic oil) disputes this any longer. "Peak oil" has rather become the belief that societal and economic disruptions will begin when depletion of world oil-supplies passes the 50% mark while demand keeps going up. Note that there is no real argument about the fact that oil production must peak at some point in time. However, there is debate about when it will happen, why it will happen, and what consequences may ensue. 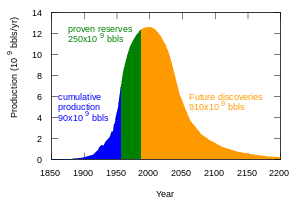 It is frequently supposed that our problems with oil will occur when we actually "run out" of oil, like a car that ran out of petrol (gasoline to 'Murkins North America), but this is clearly not the case. As oil is a non-renewable resource, at some point we will have inevitably used most of the readily available oil on the planet and global production will start to drop. This is again not disputed; former Energy Secretary Dr. James Schlesinger

claimed in 2007 at a Peak Oil conference that the intellectual arguments over peak oil had been won, and that in effect "we are all peakists now."

Intensive new oil exploration and the application of new technologies, such as fracking, led to a rapid rise in US oil production, increasing from 1.8 billion barrels in 2008 to 3.4 billion barrels in 2015[3] - just shy of the 1970 "peak", defying the Hubbert Peak notion of a single bell-shaped curve of oil production. Projections in 2012 predicted that - rather than entering "terminal decline" - US production would in fact exceed Saudi Arabia's by 2020.[4] US oil production began to decline again in late 2015 - not because of depletion, but because global oil supplies had become so plentiful that the price had fallen from its 2008 record high of $147/barrel by two-thirds, to as low as $30/barrel in 2016, making further investment in expensive US fracking uneconomic.[5][6]

Although oil is a nonrenewable resource, there is considerable debate about when we will have used 50% of the oil on the planet and its economic relevance. Evaluations range from "it has already happened" to "in fifty years." A 2009 estimate from a collaborative study between the Kuwait University and the Kuwait Oil Company places the date in 2014.[7] This also depends on how the "oil supply" is defined. It is unlikely that more than half of all of the petroleum will be used up; rather, proponents of the concept claim that half of the "available" oil will be used up, with "available" being a term open to interpretation and debate.

The definition of "available" oil is not just an academic argument, as new technology makes new resources available while rising oil prices make it more economical to tap those resources. US oil production more or less followed the Hubbert curve for decades (with a minor bump in the late '70s and '80s as the Alaskan Pipeline came online), until new technologies in the second decade of the 21st century changed what oil was considered to be "available" in the United States. While US oil production peaked at 9.6 million barrels per day, in 2014 the rate was as high as 9.2 million barrels per day, from a low of 5 million barrels per day just seven years earlier. Resources which had previously been considered to be uneconomical to exploit suddenly became viable, making it difficult to make accurate projections.

Another issue regarding the definition of "available" oil is the energy required to get it out and transport it to a refinery. Some peak oil proponents contend that if the total energy required is near equal or worse more than the energy that can be gained from the oil then practically the oil is not "available". It is the same reason that people don't "mine" the ocean for the gold suspended in it; the cost of "mining" ocean gold is far more than the gold is worth at current prices. However, the main value of petroleum - its use as a portable fuel source compatible with existing transportation - means that, in fact, a negative EROEI (energy returned on energy invested) can be tolerable: the energy spent extracting the petroleum effectively transforms that spent energy into petroleum that can be used as fuel. By comparison, hydrogen as an alternative to gas/petrol can be produced with an efficiency of up to 85%, that is for every 1 joule input you get 0.85 joules-worth of fuel out, albeit in a more convenient form.[8] In practice, EROEI has been difficult to calculate and varies significantly. For oil and gas (which tend to be produced together), the ratio of energy returned to energy invested has been estimated as low as 8:1 to as high as 45:1 with different times, locations, and technologies.[9] Once that ratio hits 1:1 it doesn't matter if there was still trillions of barrels of oil still in the ground - it doesn't matter because you get as much energy out of it as you put in getting it and turning it into a form you can use as energy.

As mentioned above, there is much debate about the consequences. The sources mentioned in the introduction (New Scientist and the US DOE report) suggest that the consequences could potentially be quite dangerous; others suggest there is nothing to worry about as human ingenuity and laissez-faire always fixes everything.

The most obvious consequence will be an increase in the cost of fuel for transport, resulting in pricing of all transported goods rising, leading to inflation. As plastics, fertilisers, explosives, and many other things are made from oil[10] all these will go up in price. One could argue that peak oil would spur development of "cleaner" energy sources, and thus counteract some of the effects caused by a lack of oil. This still leaves the problem of how to make petrochemicals we need.[11] However there has recently been a lot of research into alternative sources of petrochemicals, ranging from plant-based products that can be extracted from current crops or grown by micro-organisms, to purely chemical synthesis using inputs such as carbon dioxide or natural gas, or from waste and other byproducts.[12]

Some people believe that it is unlikely that renewable energies will have been developed by the time oil becomes less practical as a high energy density source of fuel.[13] There is a chance that coal could take over some of oil's role in the world's economy[14], which is scary to say the least (coal is generally a dirtier source of energy than oil). Proponents of nuclear energy and biofuels get excited at this point — although eventually, nuclear too will have the same problem.

It is argued that the projected increase in the price of oil will stimulate exploration and exploitation of presently uneconomic or prohibited oil production areas, such as in the Arctic or Antarctica (these places would also be opened up due to global warming, as we begin to see even now). This is certainly true. However, there is a lot of uncertainty if that will greatly change the picture of rapidly rising oil prices, as the exploitation of these alternative areas will be very expensive; this cost will be passed on to consumers. And even the advocacy of releasing methane through drilling in the polar regions, is, well, asking for suicide.[15]

It is interesting that all peak oil debates have, as their base assumption, the idea that we will actually use all the accessible crude oil on the planet, and take no account of any possible reduction in use that would occur if we try to reduce AGW, nor the development of new technologies, non-fossil energy sources, and coal-to-liquid processes, which have been technologically mature for decades but are not currently economically viable.

Some who maintain that those who believe demand for oil will keep going up (as available supplies drop) also fail to understand how supply and demand, price elasticity, substitute goods, and other basic market mechanisms work. According to this argument, if and when oil becomes too expensive for economic functions which depend on it, the market will seek substitute goods, which will progressively reduce the demand for oil as this process continues to the point that oil actually running out will not be a concern.[16] Those who believe substitute goods are too expensive, or do not exist, fail to understand other basic market mechanisms such as economies of scale, human ingenuity, and, perhaps, hubris. Analysts have noted that high oil prices are bad for the future of the oil industry, as it encourages people to develop cheaper alternatives.

Dr. Christoph Rühl, chief economist of BP, has argued that the major limiting factor on oil production is likely to be global warming. There is a campaign by environmentalists to leave fossil fuels in the ground and stop exploration and research into non-conventional sources of oil, which assumes there is a lot of fossil fuel available and we should stop using it as soon as possible, rather than drill until it is uneconomic or impossible to extract it.[17]