I think it is a mistake to use "Queer" as a catchall because it was originally a slur. Yes, some have reclaimed it, but some most certainly do not. Moreover, the term is used to describe in the 1970's, before queer was reclaimed.

At the college I go to, next Saturday is "Coming Out Day", in which homosexuals are encouraged to come out and announce, without fear or bias, that they are gay, and move on with life. Naturally, a student organisation got their shorts in a twist and staged a protest (50 students) against the Coming Out Day. Being the rationalist I am, I gatecrashed the protest. Now here is where the good news comes in. For the last week, I have been suffering from a NASTY cold, throwing up, incessent trips to the crapper, burning all up and down, and suffering from sudden heat flashes and chills. The good news is that I was still somewhat ill when I crashed the event... and I did my best to.. ahem... share the love =).

I changed the following line in the Queer Theory section (differences are in bold italics):

Queer theory is an outgrowth of the gay rights movement that suggests that while homosexuals deserve equal treatment, they either should not or do not want equal access to "heteronormative" institutions, such as marriage.

Queer theory is an outgrowth of the gay rights movement that suggests that while homosexuals deserve equal treatment, they either should not or do not want incorporation into "heteronormative" institutions, such as marriage.

My edit was summarily undid with a request for explanation. Queer theory (or the element of it being referred to, anyway) proposes the rejection of heteronormative institutions. The old/current wording, however, implies that it endorses inequality, endorses "queers" continuing to be discriminated against by the status quo. That's an important and profound difference. One can, for instance, simultaneously oppose the institution of marriage, and still support overturning the legal discrimination based on gender within that institution so long as it's still around.

I'm not quite sure if that's satisfactory justification for my edit or not, since I don't know what Lyra Silvertongue's objection was. Perhaps she can articulate? --Mqduck (talk) 08:06, 9 August 2010 (UTC)

I salute you for being so thorough and I apologize for being a very unclear in the undo summary. The reason I undid the edit was because it was a change that requires explanation in-article, very much like what you did here. I think you should add this to the article. Keep up the good work! Lyra § talk 08:14, 9 August 2010 (UTC)

I thought about adding elaboration along those lines when I first made the edit. Thing is, I'm not so sure it properly belongs under the heading "Queer Theory". I thought it might turn it more into a section on criticism in general (not just from Queer Theory) of the current focus of the mainstream gay rights movement on normalizing "gay" as an accepted sexual identity integrated into the social norms and institutions that discriminated against them for so long, rather than radically challenging society's norms and institutions on a fundamental level. It wouldn't be fair to ascribe such criticism to queer theory alone, and I wasn't sure about making bigger changes to the article.

Thinking about it more, I think what this article needs is a section specifically on gay marriage, to which a subsection on criticism from more, shall we say, "far reaching" elements of the gay (et al.) rights movement could be added. --Mqduck (talk) 09:12, 9 August 2010 (UTC)

I still don't quite get queer "theory"... every explanation of it seems to differ. On the one hand it's apparently this idea that you should identify yourself by a complex range of ideas rather than just single statements like "gay" or "straight", on the other hand it's all about what gay people ought to do, which is contradictory.

I wrote a big, long answer to this before finally realizing that I was actually only espousing my own point of view and didn't really even manage to answer the question. If anyone's interested, you can read the fruit of my misguided labor here.
Anyway, in regards to your question... Can you give an example of what you mean by queer theory telling gay people what they ought to do? --Mqduck (talk) 17:39, 9 August 2010 (UTC)

"they either should not or do not want incorporation into "heteronormative" institutions - I think that pretty much speaks for itself, really. It's a fairly big "ought" there. Although my main issue with the concept is the word "theory", as it doesn't predict or explain anything and doesn't seem to use any evidence to back it up - probably why I have trouble understanding it, despite having scoured a few articles and knowing someone who recently did a piece of gender studies coursework explain it to me (though I'm not convinced she understood it, despite the lecturer mentioning it every few moments). I will read your gender-rant and perhaps comment further.

I'd like to remove the Conservapedia section, any objections?

Relevance of the UN vote/map?[edit] 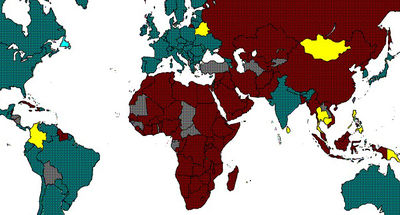 Results from a vote to remove sexual orientation from a clause from a 2011 United Nations resolution condemning arbitrary execution. The countries that voted in favor of removing sexual orientation are shown in red. The countries that were against the arbitrary execution of homosexuals are shown in green. Yes, half of the world wants to kill gay people. Surprisingly, it's not, for the most part, the Judeo-Christian half.<ref>http://www.huffingtonpost.com/thor-halvorssen/united-nations-its-okay-t_b_787024.html</ref>

Bloomingdedalus added the map to the right. Since it's sourced from the Huffington Post, I decided to do some fact-checking. The author of the HuffPo piece failed to provide the name/index of that resolution, of course, so I had to do some digging.

So far the HuffPo story mostly checks out. Butt...

I don't know about the image, but the caption gives undue weight to religion as a factor. Some of the "green countries" could just as much have been affected by local democratic traditions or enlightenment-influenced thinking, in which the role of Judeo-Christianity is questionably significant. Nullahnung (talk) 17:40, 5 February 2014 (UTC)

I've already removed that sentence from the article. I'm wondering what to do with the rest - that map is just a snapshot in time, without the context it's fodder for misinterpretation.--ZooGuard (talk) 17:43, 5 February 2014 (UTC)

We should elaborate on it to enough of a degree so as to make the context clear? And if after that the usefulness of the addition of the image does not become apparent, then do away with it. Nullahnung (talk) 17:46, 5 February 2014 (UTC)

Yeah, so... I guess we should include a snapshot of 2012 alongside if we're going to keep the 2010 picture to signify that things are changing. That would be a bit much, though. We shouldn't be documenting such things in great detail year-by-year. If there's any bigger trend over the years that could be drawn from this, we should state that, but the picture as it is now is not particularly useful and should be done away with. Nullahnung (talk) 09:23, 6 February 2014 (UTC)

I'm just being extra sarcastic since I found on the "homophobia" page that laws criminalizing gay behavior were only present in "sub-Saharan" (read here: non-Islamic) parts of Africa. Not remotely true. I don't really think it's appropriate to lie to gay people who might not be as inclined to research the actual attitudes of various countries and, hence, arive at a false sense of security regarding Islam's position towards them. It appears that Communists (looks like Chavez' cabal voted against it though) aren't a fan either given that Cuba and China voted to strike the sexual orientation from the bill. I'd say you can alter the snarky quote all you want, but failure to describe the actual positions of nations in the world towards protection of peoples' lives due to their sexuality is something I don't believe belongs on a website devoted to debunking crankery.

Unsurprisingly, it's mostly nations which have had heavy imperialistic presence from European, British, and American enlightenment thought which are willing to capitulate to the idea that people have human rights. I think it's perfectly acceptable for such an image to provide a good open context for the views represented by the administrations of various countries. Regarding my original quote about "Judeo-Christian" - obviously enlightenment and the liberal forms of Christianity have a much heavier influence than Scott Lively, Lou Engle and those thugs. But I do think you'd be hard pressed to find a large portion of the Christian population regardless of what their position towards homosexual behavior or rights is is going to advocate going so far as to kill them. Just saying. The Bible Belt is not remotely the sole representative of Christian thought, nor is it the worst, as the sub-Saharan African nations have shown us. I also think it's funny to see Putin called a bigot, in so many words, by the upper castes of India. Bloomingdedalus (talk) 16:39, 6 February 2014 (UTC)

Islam = not gay friendly. I really don't understand what's wrong with putting up evidence of the massive dangers to homosexuals in this world and where they originate from. You censors for Islam on these pages are very disturbing. Not to mention, you're fucking cranks: http://filipspagnoli.files.wordpress.com/2008/10/legality-of-homosexuality-map.png

Though the level of anti-gay violence in these regions doesn't approach Nazi holocaust levels, denying that these countries voted in favor of arbitrary execution of homosexuals and that many countries practice it in their jurisprudence is unacceptable behavior.Bloomingdedalus (talk) 21:47, 6 February 2014 (UTC)

I appreciate you wanting to make people aware of the world's hostility towards homosexuals. If you can find consistent data over the years, then put that in. That picture was just a freeze-frame in time and doesn't say much about how things are developing. We would need to show how things came to this state and how they have developed from there, see, that would be useful. Nullahnung (talk) 02:47, 7 February 2014 (UTC)