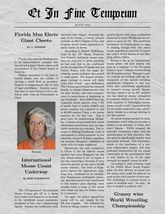 Fake news consists of "news" that is blatantly false or otherwise distorted in the hopes of getting more clicks by feeding people the headlines they didn't know they wanted, in the hopes knowledge that shamelessly pandering to an agenda often proves sufficient to suspend the readers' disbelief. Depressing amounts of clicks can be garnered from fake news, simply by virtue of it posing as 'clear-cut examples' which — if true — would lend overwhelming apparent support to one side of the relevant multi-faceted, emotionally charged and complex issue. While fake news is a threat to common decency, one must admit that it is more entertaining than most normal news.

It is important to distinguish between fake news on the one hand, and mere biased reporting on the other. Fake news denotes outright fabrication, while slanted reporting at least covers events which were not made up from whole cloth. Fake news should also be distinguished from yellow journalism, which may contains some truth, but is primarily intended to attract attention rather than to inform or to influence public opinion. Fake news outlets aren't just the equivalent of some leaflet guy ranting on a street corner. These are blogs, podcasts and shows which reach people in the millions — notably the young and poorly educated, unknowingly passing along the 'news' via social media — raking in tons of cash in illegitimately generated advertising revenue as a result.