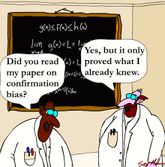 —Did you read my paper on confirmation bias?
—Yes, but it only proved what I already knew.

Confirmation bias, also known as Observational selection or The enumeration of favorable circumstances is the tendency for people to (consciously or unconsciously) seek out information that conforms to their pre-existing view points, and subsequently ignore information that goes against them, both positive and negative. It is a type of cognitive bias and a form of selection bias toward confirmation of the hypothesis under study. Avoiding confirmation bias is an important part of rationalism and in science in general. This is achieved by setting up problems so that you must find ways of disproving your hypothesis (see falsifiability).

Confirmation bias is one of the traits that just comes with the human condition. There is a human tendency to favour testing the predictions of a hypothesis that only confirm or prove it, at the expense of testing any predictions that would disprove a hypothesis. This is a problem because attempts to disprove a hypothesis are the most effective ways of comparing two or more hypotheses, and are also the most informative methods for acquiring evidence. However, even practicing scientists often miss these examples and the scientific method has basically "evolved" to try and counteract it.

Even in cases where people do expose themselves to alternative points of view, it may be a form of confirmation bias, in that they want to confirm that the opposition is, indeed, wrong.

A prime example stems from the intelligent design and creationism movements. Proponents of these ideas start by assuming that an intelligent creator must have been behind life (often assuming the Christian god) and then seeking out any (and only) evidence that might back up this claim. For example, Answers in Genesis often claims that fossils in the ground are proof of a Global flood and that layering is caused by the relative abilities of animals to reach higher grounds. They quote evidence which shows that humans and primates are on top of dinosaurs in the geological record and claim that this is because we "could climb to higher points on the landscape".

However, they never address any evidence that might disconfirm this hypothesis such as why angiosperm plants and their pollen is never found below vascular fern fossils, or why we see absolute cut-offs in the fossil record rather than a statistical tendency, which the "climbing" hypothesis would suggest. (In other words, how come there weren't some weak or elderly humans who died with the dinosaurs?) The fossil record is in fact best explained by common descent but this is ignored through confirmation bias by creationists.

Creationists, along a similar vein, claim that "evolutionists" are practicing confirmation bias, since they are all atheists out to distort the scientific record to make it look like God does not exist. This claim is, of course blatantly false: theistic evolution disproves it. Furthermore, not all scientists are atheists, and additionally old-earth and evolutionary theories were developed by considering new observations rather than dismissing the old ones. It is, however, true that all Young-Earthers are theistic.