The tree of life is a metaphor that has different meanings depending upon the forum in which it is discussed: 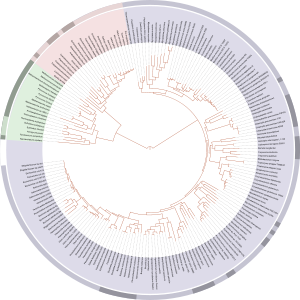 It refers to the visual representation of the phylogenetic relationships between life due to evolution and common descent. While the construction can be created in multiple patterns the most common form is a vertical branching structure that resembles a tree. One problem with this representation is its connotation or implication of teleological progress. A popular current version, the Hillis plot, uses a circular tree with current species at the circumference.

It is also slightly wrong. Organisms, especially simple ones, can rarely acquire genes from other species, even from entirely different kingdoms, via a process known as Horizontal gene transfer. Often they absorb DNA from the surrounding environment and incorporate it into their own genome; this allows an organism without sexual reproduction to acquire useful genes (chances are if there is a lot of a strand of DNA in the environment, it's because it's useful in said environment). This makes the bacteria and archaea portions of the tree less of a 'tree' and more of a 'tree-like web'. But it is not limited to simple organisms. Humans for example, have 145 genes that originate in bacteria, fungi and other things you wouldn't normally think of when you picture your ancestors (unless your family isn't known for hygiene).

A more complete genetic analysis of eukaryotes (organisms other than bacteria and archaea) has begun to turn up some unexpected relationships and groupings. The old Kingdoms of life would be replaced by several "supergroups": Opisthokonts, Excavates, Amoebozoa, SAR (Stramenopiles, Alveolates and Rhizaria), Archaeplastids, and some orphans.[1][2] Opisthokonts include animals, fungi and some single-celled organisms. Excavates are unicellular organisms with a feeding groove; a well-known one is Giardia. Amoebozoa are mostly amorphous unicellular organisms, but also include the slime molds. Stramenopiles include algae, kelp, diatoms, and Phytophthora (which was responsible for the Irish Potato Famine). Alveolates include protists. Rhizaria are mostly unicellular and amoeba-like. Archaeplastids include plants and red and green algae, but not kelps.[2]

It refers to a concept — similar to that in science — that all life, no matter how diverse, is interconnected. 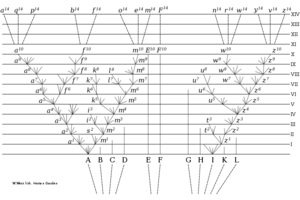 The Tree of Life image that appeared in Darwin’s On the Origin of Species by Natural Selection, 1859. It was the book's only illustration.

It refers to a symbol of immortality and/or fertility present on many cultures all around the world.

In the Judeo-Christian tradition, the Tree of Life appears in Genesis as a second tree, humans are intentionally prevented from eating, in order to suffer and die so that only God gets to be immortal.[3]

Then, by controlling supply, God has apparently formed a religion based around worshipping him and breaking the human spirit, after which only a select few will be granted the right to eat from said tree.[4]

There everyone will live happily ever after, with God sitting on a throne and the saved believers being servants to him and having his name stamped on their heads.[5]