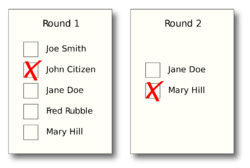 Two-round voting is sort of self-descriptive. The two-round system is a single-member system, usually first past the post, under which the first round of voting includes all the candidates, while the second round only includes the two winners of the first round. One example of this is France. Like IRV, it was created to deal with some of the issues of first past the post. It is mostly seen to elect "presidential" figures down to and including the mayoral level. While it does address some of the downsides of FPTP, it fails to address others and creates some unique downsides of its own. A somewhat related but different method is employed to select hosts for the Olympic Games or the Soccer World Cup in which the weakest vote getter is eliminated after every round until a predetermined majority is reached. This multiple round election system is arguably "fairer" and ensures no option is "prematurely" discarded but it presupposes the willingness and ability to hold multiple rounds of elections in short succession and is thus only practicable in small voting bodies rather than general electoral populaces.

Downsides of FPTP it addresses[edit]

Downsides of FPTP it does not address[edit]

This politics-related article is a stub.
You can help RationalWiki by expanding it.
Retrieved from "https://rationalwiki.org/w/index.php?title=Two-round_voting&oldid=2034275"
Categories:
Hidden categories: