Propaganda is the use of media and other information sources in order to affect or control the perceptions and behavior of a population. It is best known for its frequent insidious attempt to sell ideas or policies through politically rich marketing so people accept or support ideas to which they would otherwise be resistant or skeptical. However not all propaganda is designed to manipulate and it can sometimes be open and transparent encouraging common and popular goals. In the early 20th Century propaganda as a term was synonymous with government marketing and did not have an inherent negative connotation. It's origins date even further back to religious marketing by the Catholic church.

Propaganda is designed to influence emotion, hence the factual accuracy of the content is of little or no relevance. Propaganda is more versatile than advertising because it is not always about encouraging consumerism, name-recognition, and brand loyalty. Rather, it can be used to create and associate negative emotions with opponents. Individual pieces of advertising and propaganda share techniques including repetition, reliance on famous spokespeople, musical and lighting cues, and disguising content as innocuous information.

Religious and political movements of all types have used propaganda widely. For example, in World War II, the Allies, Soviets and Nazis, all very different in their ideologies, all used propaganda to a great degree during the course of the conflict and after.[3][4][5]

The term goes back to the Thirty Years War (1622) and originally meant the spread or propagation of the Catholic faith against filthy Protestant Heresy but wasn't applied to secular matters until the 1790s and didn't pick up its negative connotations until the mid-point of the 19th century.[6] Even then it wouldn't be seen as threat to democratic ways of life until the 1930s,[7] and during World War II become pejorative in common usage...ironically thanks to the Why We Fight Propaganda films shown to soldiers and then the public.

Like many words, it has fallen victim to the euphemism treadmill – meaning, sometimes we only call that which we disagree with propaganda. The rest is considered PR (Public Relations), marketing or awareness spreading. 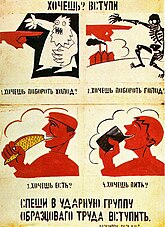 Agitprop is a particular kind of propaganda designed to arouse intense, even violent, emotions within people who are exposed to it. It is a portmanteau of the Russian words for "agitation" and "propaganda," and the term originated in the Soviet Union, whose information bureau was originally called the Department for Agitation and Propaganda.

The arts are often employed as a medium for presenting propaganda. Art can be used as propoganda to great effect, so much so that even the right wing wingnut Jordan Peterson collects communist propoganda.[10] In the 1960s and 1970s, Chinese art students created much of the classical Maoist propoganda that is famous across the world, although in recent years said style has given way to badly photoshopped posters of tanks, planes and soldiers, etc.

This isn't unique to communist nations, during the Japanese colonial period, many woodblock prints were also produced, they echo the artistic quality seen from other ukiyo-e prints (named Senso-e (戰爭絵).[11] If one looks past the political message and simply values the art then it's mainly harmless...unless the person is a lamb to the slaughter.