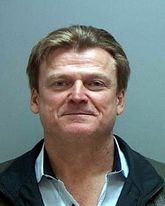 Patrick Michael Byrne (1962–) is an American businessman, founder and CEO (until 2019) of Overstock.com

Byrne does a lot of jawdroppingly weird stuff in the name of Overstock, and seemed to be allowed to do so by the board as long as he kept making money.

is essentially the process of selling shares or assets without actually owning them. Of course accusing a person or company of naked shorting is a serious allegation, one that most people would not make without a lot of good evidence, but Patrick M. Byrne is not most people. Byrne has, through his company Overstock, filed two lawsuits against the Rocker Partners and the Equities Research Firm claiming that they both short sold his company and payed for negative press to artificially drive down prices of Overstock.com. As if that weren't enough Byrne also believes in a sort of banking conspiracy out to destroy his company. He has said, "there's been a plan since we were in our teens to destroy our stock, drive it down to $6--$10 ... and even a plan for how the company would then get whacked up." He has even referred to the leader of the conspiracy as the "sith lord", but for some reason he was unwilling to name any names[4].

As a libertarian Patrick M. Byrne supports a number of questionable economic policies, including a restriction requiring all public schools to spend 65% of funds on "class education." Unfortunately librarians, school nurses, school lunches and bus drivers don't count as class education meaning that schools would have to cut a number of programs that largely benefit poorer students.[5] Huh.

Also in the field of education Byrne has come out as a strong supporter of vouchers for private school education, strongly criticizing Jon Huntsman for not supporting the voucher program as much as Byrne had hoped.[6]

Byrne is also convinced that Bitcoin is the economic salvation of America.[7] Overstock was the first major retailer to accept Bitcoin, via a payment processor.[8] The company's Bitcoin holdings lost about $100,000 in 2015.[9] As of August 2018, Overstock's cryptocurrency subsidiary tZero is now worth more than Overstock itself,[10] which could be a bad sign for Overstock, or the sign of another cryptocurrency crash.

Patrick Byrne is a notable gun nut. At one point he was arrested for trying to carry a loaded gun through airport security; Byrne claimed that the incident was purely accidental. When asked how he could accidentally put a gun in his bag he responded, "I keep the gun next to my bed every night". Guns are just like slippers, perhaps? Or...something?

Just before being pushed out of Overstock.com, Byrne claimed to have been fucking convicted Russian spy Maria Butina, and that she should become the next president of Russia.[11] Byrne admitted to funneling cash to Butina at some point after she was released from prison and deported to Russia in 2019 and before she was elected to the Russian parliament in 2021.[12]

Byrne made several conspiracist claims, including his own involvement in the deep state and men in black (supposedly meaning the FBI and not the usual Ufology).[13] His rantings led to Overstock.com's stock tanking and to his resignation as CEO.[14]

On December 18, 2020, days after the Electoral College had certified Joe Biden as the winner of the 2020 U.S. presidential election, a group of high-level kooks showed up at the White House. The kooks were were not officially invited but were let in by a junior staffer and gained access to Trump anyway. The kooks included Byrne, Trump's bogus election fraud lawyer Sidney Powell, felon/Lieutenant General Michael Flynn, disbarred Trump personal lawyer Rudy Giuliani and others. What ensued was a prolonged and heated exchange between the kooks and White House lawyers. The kooks managed to convince Trump that by various connivances the election could be overturned even though they knew this would have been illegal and/or unconstitutional. Trump was convinced by the kooks and sent out the notorious "be there, will be wild" tweet in the early morning hours of the 19th, setting the stage for incitement of the coup attempt on January 6th, 2021.[15][16] At the meeting, Byrne advocated that the "the National Guard re-run the elections in those six states" (meaning, of course, the six states where Trump lost by the closest margin) and spouted conspiracy theories about Hillary Clinton.[17][18] Byrne was a primary source for funding and fundraising for a May 2021 farcical "recount" in Arizona, run by an inexperienced, Trump-worshiping company known as "Cyber Ninjas".[19][20] In June 2021, Byrne produced a "film" and other assorted media entitled "The Deep Rig" with yet more promotions of Trump's bullshit fraud claims. [21] Unsurprisingly, in spite of his Overstock.com wealth, Byrne also has no qualms at grifting the "true Trump believers" for some of their hard earned cash. [22]

Due to Byrne's prominent role in making these bullshit claims, on August 10 2021, Dominion Voting Systems filed a lawsuit claiming that Byrne (along with Newsmax and One America News Network) defamed the company, seeking 1.6 billion dollars in damages. [23]