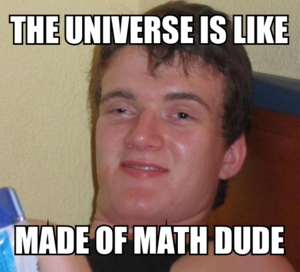 He presents it as a physics "theory of everything" (unification of all the known forces of physics), but really is more a philosophy, since it is so high-level that it is essentially impossible to express in the form of equations. It is a theory which makes no predictions — all possible observations are consistent with it. As such, it is not a scientific theory, but a piece of philosophy.

This philosophy-related article is a stub.
You can help RationalWiki by expanding it.
Retrieved from "https://rationalwiki.org/w/index.php?title=Ultimate_ensemble&oldid=2187678"
Category:
Hidden categories: