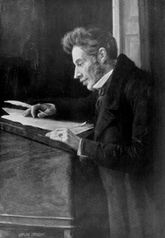 Posthumous painting of Kierkegaard from 1902. Usually considered his most lifelike portrait.
Not to be confused with Emil O. W. Kirkegaard.

Søren Aabye Kierkegaard (the double-a in Danish is pronounced more like the o in sword than the a in father) (May 5th, 1813 – November 11th, 1855) was a Danish philosopher and theologian. His work also crosses the boundaries of psychology, literary criticism, devotional literature and fiction.[1] He was also an all-around doleful Dane.[notes 1] Still, the quality of his commentary and philosophical extrusions enamor him not only to other doleful Danes, but to doleful smart people everywhere.

He lived, then he died. As most all of us are condemned to do. In between he despaired. Given the emotional pain of his early existence that was the proper emotional reaction. His affluent father was deeply pious and/or depressed. His mother was the quiet, plain and uneducated household maid who married his deeply deeply pious and/or depressed father. After he got her pregnant.

It is difficult to present a concise overview of Søren Kierkegaard's thoughts, or to describe them in terms of a specific philosophical or theological system as such. This is especially due to the fact that Kierkegaard often wrote under different pseudonyms, many of which discussed extensively with one another, or even disagreed strongly. Kierkegaard himself claimed to have no particular relationship with anything he wrote, intentionally leaving the interpretation entirely as an exercise to the reader.[notes 2]

For that reason, in order to understand Kierkegaard's philosophy, it is necessary to look at not only the writings themselves in isolation, but also at how they relate to the rest of his works. Often, the most important clues are to be found in the differences between works and in the dialogue between the different pseudonyms.

Further, the concept of subjectivity is central to Kierkegaard, which led him to believe that while such a thing as objective knowledge does exist, it is usually perceived subjectively by human beings. This has the implication that most forms of communication, especially on subjects such as philosophy, is indirect communication, where the recipient must experience for himself the thing being communicated. Thus, simply explaining a philosophical point of view is insufficient for Kierkegaard - rather, the reader must be carefully challenged to figure the point out for himself, allowing him to experience it subjectively, and to appreciate that experience to a greater degree because of the effort he has invested in it.

That said, though, Kierkegaard presents what can be described as a "proto-existentialist" philosophy. As mentioned, subjectivity is a central concept for him, and much of his writings discuss the relationship of the subjective individual versus objective facts. This leads to one of his other important themes, individuality and the definition of the self, a definition which must come from the individual himself, not from any outside source. In the end, it is only through this act of conscious self-definition that a person can be said to 'exist' as an individual and a human being.

However, in order to define one's self, it is necessary to make a choice, which is another essential element of Kierkegaard's philosophy. This choice is one which must be made by the person himself, and which is ultimately unlimited by anything external to him. While the choice may be influenced by such things as expectations of others, peer pressure, or social norms, the decision on whether or not to follow such influences is merely another choice that the individual must make.

The one thing that characterizes any important choice is that it will also carry certain consequences with it, which may be irreversible once the choice is made, and which the individual will have to live with. To take one example of Kierkegaard's, one may decide to marry or not to marry. If one decides to marry, one voluntarily accepts to honor certain commitments and responsibilities, which may make other choices in the future impossible. If one decides not to marry, on the other hand, the bride of choice will probably eventually marry someone else, and the opportunity is gone. Either way, whether one decides to marry or not to marry, there will be consequences and thus also potential for regrets.[notes 3]

It is exactly this combination of complete, unlimited freedom of choice and the potential regrets that may come from these important choices that lead to the concept of anxiety, which represents the natural dread of making such irreversible decisions. For Kierkegaard, many people deal with this existential anxiety by refusing to make such decisions, but this merely means that they allow others to make these essential decisions on their behalf, and thus deny their own existence as individuals. 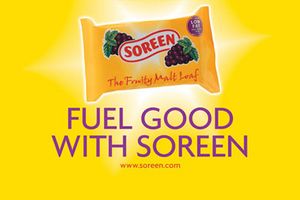 Don't be a doleful Dane. Fuel good with Søreen (no relation)

Kierkegaard's influence during his own lifetime and the decades after his death was very limited - his works were almost unknown outside the small literary and upper social circles of Copenhagen and were also opposed by the Danish National Church, of which Kierkegaard was highly critical.

It was not until the 1870's that Kierkegaard was brought to the attention of a wider European audience by Georg Brandes, a prominent critic and scholar of literature, who wrote several books about him. By the turn of the century, several of Kierkegaard's most important works were translated into German and French, and later English, making them available to the academic circles in the rest of Europe and America.

Kierkegaard was soon recognized as a highly original thinker, and greatly influenced the development of philosophy in the 20th century, including notable philosophers such as Jean-Paul Sartre, Simone de Beauvoir, Albert Camus, Martin Heidegger, and Ludwig Wittgenstein. Many prominent theologians drew on him as well, such as Karl Barth and Paul Tillich.