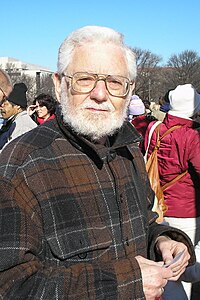 William Blum (1933–2018) was a journalist, a former State Department employee, and a staunch critic of American foreign policy. His basic argument is that just about every American foreign intervention, whether justified in terms of "fighting communism" or "bringing freedom and democracy", was just another imperalist maneuver.

Blum left the State Department in 1967, abandoning his aspiration of becoming a Foreign Service Officer, because of his opposition to what the United States was doing in Vietnam. He then became one of the founders and editors of the Washington Free Press, the first “alternative” newspaper in the capital.[1]

Blum takes great care to properly reference most of his arguments, often drawing on "papers of record" such as The New York Times, Washington Post and The Guardian. When available, he will also cite official documents and reports.

On a tape released in January 2006, Osama Bin Laden said that "it would be useful" for Americans to read Rogue State, a book by Blum. Blum was both shocked by and pleased with the questionable endorsement.[2]

This media-related article is a stub.
You can help RationalWiki by expanding it.
Retrieved from "https://rationalwiki.org/w/index.php?title=William_Blum&oldid=2020811"
Categories:
Hidden category: