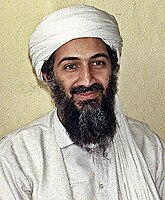 Osama bin Laden (1957–2011) was the leader of al-Qaeda, a fundamentalist Islamist terrorist organization which opposes the intrusion of decadent "Western" values (such as pornography,[1] liberalism, Judaism, etc.), the corruption of Middle Eastern governments (well, what they see as it), and certain policies of the United States, notably the stationing of troops inside Saudi Arabia. Osama responded to the Soviet atrocities in Afghanistan by... killing as many people as he needed to let off steam.

Osama[notes 1] was disowned by his Saudi family in 1994, two years after the first bombing at the World Trade Center. The bin Laden family are billionaire construction-moguls and Saudi royalty, but Osama had been jealous of his brothers, Salem, Tarek (a friend and supporter of Ronald Reagan), Yeslam, and especially Bakr, the current leader of the Saudi bin Laden group, and Shafig, the Carlyle Group representative. This is due in part to Osama having been the son of one of his father's concubines (whom he later married to avoid the scandal).[2] His father, Muhammad, never saw him as a "real" son and he was mostly raised by his mother.

To satiate his jealousy, Osama, seen by his father as the most dull-witted and lazy of his brothers, formed the al-Qaeda movement, through which he hoped to one-up them all. The movement started out small, but Osama developed al-Qaeda into a very efficient force which mostly trained other Islamist insurgents. This has made it very difficult to eliminate al-Qaeda, and has spread their influence within the Muslim world and beyond. Perhaps in response to the playboy lifestyle of his brothers, Osama was a devout Wahhabi for most of his life. (Wahhabism, a fundamentalist variant of Islam, is itself the most rigid of the "mainstream" (i.e., state-supported) branches of Islam.) In terms of organization, Osama was most influenced by his deputy Ayman al-Zawahiri of the Egyptian Qutbist movement. Essentially, Qutbism sees Islam as being suppressed and controlled by Western infidel influences and apostate Muslim regimes.

Osama, like many religious radicals, was anti-socialist, anti-capitalist, anti-corporate, and anti-democracy; he used this rhetoric mostly to attempt to cultivate personal loyalty in his followers, instead of loyalty to his cause.[citation needed]

Bin Laden was also heavily anti-Semitic.[3][4] From his "letter to America" (translated from Arabic):

You are the nation that permits Usury, which has been forbidden by all the religions. Yet you build your economy and investments on Usury. As a result of this, in all its different forms and guises, the Jews have taken control of your economy, through which they have then taken control of your media, and now control all aspects of your life making you their servants and achieving their aims at your expense; precisely what Benjamin Franklin warned you against.[5]

However, much of Osama's personality was a carefully crafted facade. He took great pains to appear generous with his money and to appear to live a simple and "moral" lifestyle, aka. trying to pull off a second Jesus. He had never been one for ostentation and chose to dress in well-worn clothes, although he always still loved sports cars.[6] He even ate with his right hand, although he was left handed, because this is what Muhammad did. However, some reports portray him as quite different in private. 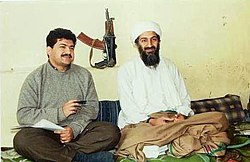 Osama was an important leader of the Arab mujahideen during the Soviet-Afghan war. Originally a loyalist to the ruling Saudi monarchy,[7] bin Laden answered the Saudi government's call to jihad against godless communists. Tales of his exploits in support of the war filled Arab media and he became a national hero back home.[8][9] By the war's end, and with the death of the jihad's spiritual leader Abdullah Azzam, Osama became the undisputed leader of the international jihad that the Saudis originally unleashed.[10]

Some people believe that Osama was directly trained by the CIA, but this is a myth propagated by conspiracy theorists. The CIA worked through the Pakistani intelligence services to arm and train any and all anti-Soviet resistance; Osama was part of a parallel operation that indiscriminately funneled fighters and funds to Afghanistan from across the Arab world. Osama didn't need CIA money - he was willing to squander his considerable $350 million personal fortune on jihad. In short, while the CIA may have co-operated with Osama's group, they did not collaborate with them.[11][notes 2]

When Saddam Hussein invaded Kuwait, bin Laden offered to use his Afghan war veterans to defend the Kingdom but was rebuffed by Saudi King Fahd. The deployment of U.S. "Crusader forces" in Saudi Arabia to attack other Muslims deeply offended and radicalized bin Laden. The hometown war hero became openly critical of the Saudi ruling establishment and embraced the Salafist view of jihad.[12] Bin Laden exiled himself to Sudan to conspire against the regime and the American presence in the Arabian peninsula. He was stripped of Saudi citizenship in 1994 and after several attempts on his life moved back to Pakistan.[13]

Bin Laden began to see the U.S. as the primary obstacle to political change in the region and a direct military threat to the global Islamic community. Bin Laden concluded that a direct global confrontation with the U.S. was needed.

He denied responsibility for the 9/11 terrorist attacks.[14] In response to this, the Bush administration invaded Afghanistan, booted the ruling Taliban regime from power, and forced Osama into hiding in the mountains. A while later, the Bush administration invaded Iraq, a country Osama was definitely not in[citation needed] and also a country that was itself opposed to al-Qaeda.[15] Prior to the invasion, Saddam ran what was at least a mostly secular state (as evidenced by its breweries and distilleries) and drew the ire of al-Qaeda. The rise of the al-Qaeda affiliated insurgency did not begin until Saddam's grip was forcibly loosened. This was primarily because George W. Bush did not understand complicated scientific equipment like maps and globes, and just picked the only country whose name he could remember at the time. Of course, ISIS was not the violent reality it is today until Obama implemented a subsequent naive gutless diplomatic withdrawal of US troops from the country.

Assistant to the President for Counterterrorism and Bush holdover John Brennan briefs Barack Obama prior to the raid to kill bin Laden. Brennan, implicated in torture allegations, was promoted by Obama to CIA Director.

According to rumors circulated by the Paris La Figaro and the Times of London Osama had been a kidney patient, and not only was the US unable to detect him amongst all the men in beards and turbans running around the Pakistan/Afghanistan border region, they appeared to also be unable to detect the kidney dialysis machine amongst all the others in the area, much of which does not even have access to electricity on a regular basis.[16]

ABC investigative reporter Brian Ross reported in 2006 the press secretary to the president of Pakistan told him bin Laden would not be arrested as long as he agreed to live as "a peaceful citizen".[17]

Bin Laden was killed in his compound by US Navy SEALs on May 2nd, 2011 in Abbottabad, in northeastern Pakistan in the operation codenamed "Neptune's Spear" (the proclamation "Geronimo E-KIA" was especially controversial because it compared Osama to a 19th century Native American freedom fighter.[18] He was buried at sea to prevent any possible shrines from being made by his followers.[19]).

The killing of Bin Laden was criticized by some, including left-wing activists Noam Chomsky and Michael Moore, who claimed that at the very least, the guy deserved a trial. Some[Who?] (both on the left and the right) believed such a trial may be used as a propaganda tool by his fanatic followers, but how much that would've affected the trial itself will never be known.

There are plenty of bullshit conspiracy theories surrounding his death, as one would expect, none of which have been substantiated whatsoever. Rest assured, the guy is dead.

The media including books and videos found in Bin Laden's Abbotabad compound give a look into his mind. Some of the English books[20] and movies[21] found were: