The 1421 theory is a crackpot claim that the Chinese (specifically, the fleet of the admiral Zheng He) reached the Americas in 1421 — decades before Christopher Columbus, discovered Australia, Antarctica, Greenland, circumnavigated the globe one century before Ferdinand Magellan's 1519 voyage, and that various Native American peoples descend from the Chinese and speak Chinese amongst even more bizarre claims. Historians generally regard the 1421 theory as pseudohistory based on nothing more than speculations, assertions, and sloppy research.[1][2][3] This theory was advanced in the best selling but heavily criticized book 1421: The Year China Discovered the World by Gavin Menzies.[4][5][6][7][8][9]

One claim by supporters of the 1421 theory is that the Apache speak Chinese.[10] The "evidence" for this claim is the following bit of hearsay from the 1918 book History of Arizona by Thomas Edwin Farish:[11]

Apache is, in fact, completely unrelated to Chinese. It belongs to the Athabaskan language family, which also includes Navajo, and has no connection to the Sino-Tibetan languages.[13] Consider the following translations of the Lord's Prayer in Mandarin Chinese and Coyotero Apache:[14]

The two languages are obviously completely unalike. While old stories like the above might be useful as an illustration of mutual intelligibility of two languages already known to be closely related, or as evidence pointing to a particular genetic affiliation of a long since dead language about which little or nothing is known, it is hardly possible to cite such anecdotes as "proof" that speakers of two languages that are still very much alive and that are known to be totally unrelated and mutually unintelligible can communicate with each other. Indeed, there is a significant body of texts in Apache

[15] which clearly shows a language totally dissimilar to Chinese. A time span of slightly over a century is insufficient to obliterate all traces of genetic relationship between what were initially mutually intelligible dialects. There are multiple possible explanations for the discrepancy between Farish's anecdotes and the attested history of Apache.

First, Farish might have simply misremembered the stories. He does not clarify the sources of the anecdotes; he may have witnessed them personally, read them in books or articles, or heard them from someone else. It is entirely possible that the original accounts did not involve Chinese-speaking Apaches, but merely acquired this form in Farish's mind over time. This seems possible, given that Farish apparently does not have first-hand knowledge of the languages in question. Alternatively, the so-called "Tartar Chinamen" may in fact have been Navajo and/or Apache pretending to be Chinese, for whatever reason. Perhaps they were playing pranks on unsuspecting outsiders, in which case they probably laughed heartily at the men's gullibility. 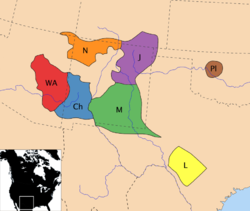 The ability of "Gee Jim" to communicate with the Apache may also be explainable by the fact that Navajo is quite close to Apache. Consider the maps on the right, which show the current and historic territories of Navajo and various Apachean languages. As can be seen, Navajo is geographically quite close to Apache; in addition, Navajo County

are adjacent to each other. One site dealing with Native American languages states: "Actually, there are at least two distinct Apache languages: Western Apache and Eastern Apache. The two are closely related, like French and Spanish, but speakers of one language cannot understand the other well–in fact, Western Apache is closer to Navajo than to Eastern Apache."[16] In other words, Apache is fairly similar to Navajo. The ability of Gee Jim (a Navajo County resident) to communicate with the Apache may be because of his actually being a Navajo; communication may have been possible due to the similarity of Navajo and Apache and/or his being able to speak both languages.

In any case, it's not as if linguists were closed-minded dogmatists who categorically refused to consider any evidence that might significantly change their picture of Amerindian linguistics. For instance, the linguist Edward Vajda

has proposed, on the basis of comparative evidence, that the Na-Dene languages (which include Apache) are related to the Yeniseian languages of Siberia, a proposal which has met with not insignificant approval within the linguistics community. If linguists are capable of coming up with and seriously considering the idea of Apache being distantly related to obscure Siberian languages with very few speakers, it is not likely that they would completely gloss over something as obvious and in-your-face as Apache being identical to Chinese.

Likewise the Tartars are actually native speakers of a Turkic language rather than a Chinese dialect.