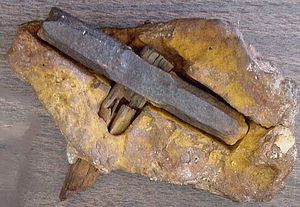 The London Hammer is a name given to a hammer made of iron and wood that was found in London, Texas in 1936. Part of the hammer is embedded in a limy rock concretion, leading to it being hailed in some quarters as an anomalous artifact: if an obviously man-made tool is old enough to have been encased in rock, the argument goes, then conventional history is wrong.

The creationist Carl Baugh latched on to the hammer in the eighties, even using it as the basis of speculation of how the atmospheric quality of a pre-flood earth could have encouraged the growth of giants.[1] The hammer is now an exhibit in Baugh's Creation Evidence Museum, which sells replicas of it to visitors.[2] Since then, various Internet cranks have used the hammer as evidence of ancient astronauts,[3] a government conspiracy,[4] and Thor (yes, him, sadly).[5]

Baugh's claims were countered by researcher John Cole, who pointed out that the rock concretion could have been the result of dissolved sediment hardening around the hammer, something which can happen in a relatively short amount of time; Cole also concluded that, judging by its style, the artifact is a 19th century miner's hammer.[6]

In the conclusion to his own debunking of the artifact, paleontologist Glen Kuban agreed with the recent age of the hammer and stressed that unless Baugh or any others could provide evidence that the hammer was once naturally situated in a pre-Quaternary stratum, it would remain a curiosity, not a reliable out-of-place artifact.[6]