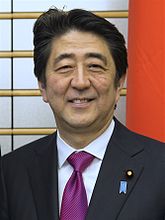 Shinzo Abe, the leader of the LDP and the former prime minister of Japan.

The Liberal Democratic Party (自由民主党, Jiyū-Minshutō), usually abbreviated to LDP (自民党, Jimintō), is a conservative party that is Japanese nationalist and right-wing populist in Japan. The party is made up of an enormous number of factions, but it is largely divided into "conservative essence" (保守本流, Hoshu honryū) and "conservative discharge" (保守傍流, Hoshu bōryū). They ruled for almost 54 years! Continuously![note 1][note 2] The post-war 1955 System

in many ways deeply ingrained the party into the fabric of the Japanese political establishment, favoured in the 1950s over leftist opposition parties early in the Cold War, and it would take until the early 1990s, after the popping of the Japanese economic bubble, until this party system could be overcome - only for a new period of LDP to ensue after a fractitious opposition-lead coalition collapsed. The LDP is currently Japan's ruling party.

Originally, it was a center-right ("conservative essence") party with a strong bureaucratic mindset, but in the 21st century, moderates fell and far-rightists ("conservative discharge") took control of the party, a process that intensified after the LDP fell into its first period of extended opposition from 2009-2012. Former Japanese prime minister, Shinzo Abe[note 3], belongs to the party and is so far-right that Steve Bannon once called him "a great hero to the grassroots, the populist, and the nationalist movement throughout the world."[1] The party's far-right tendencies have become so serious that it can no longer be considered center-right.[2][3][4]

The party's biggest benefactor and political group, Nippon Kaigi, is at the center of controversy over ultra-nationalism, neo-fascism, anti-Korean[note 4] tendencies and fabrication of history such as denying atrocities committed by Japan.

LDP advocates traditional culture based on Confucianism, Buddhism and Shinto.

This article is a stub.
You can help RationalWiki by expanding it.
Retrieved from "https://rationalwiki.org/w/index.php?title=Liberal_Democratic_Party_(Japan)&oldid=2235854"
Categories: