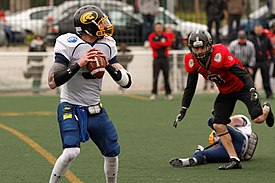 Come and have a go if you think you're hard enough.

, Canada) and is an important venue for advertisers.[1] As its name may suggest, the ball is about a foot long. The sport's major trophy is the Super Bowl: a domestic end of season championship game, contested annually by the winners of the two American football conferences.

Perhaps surprisingly, high school football programs are very popular in America. Upon thinking about it for the aforementioned 10 seconds, the inverse correlation between ready access to professional and/or Division I college football games and the popularity of the local high school programs becomes readily apparent. Instead of putting the money to educational pursuits, schools spend tens of thousands of dollars on stadiums and uniforms.[note 1] This worship of the sport and its players creates some ugly scenes.[2]

While the coaches make millions and the players earn huge amounts of money for their schools, players don't get paid a salary for their efforts; rather, they receive scholarships that cover tuition and room and board. While a "free" college education at a top-ranked school like the University of Michigan or Wisconsin might seem like a great deal, in actual fact college football players often have little time to study and are often set up with programs of study that are loaded with elementary classes (e.g., "Rocks for Jocks", or Intro to Geology) that do little to prepare them for post-college possibilities like law school, graduate school, or an engaging and satisfying career. Former college football players are much less likely to get a good job than other students.[5]

The centrality of football to American schools can also contribute to a willful blindness to rape culture. In Steubenville, Ohio, two star high school football players raped a drunk girl at a party and received great sympathy from the town and local police. Many townsfolk in this good small town were resentful at any prosecution as it would ruin the football team's season. Only after an international media outrage and intervention by Ohio Governor John Kasich were the two rapists brought to trial. One of the numerous rapes of the victim actually occurred at the home of the Jefferson County Prosecutor, who not too surprisingly wasn't very keen on investigating (there were a few other things at play there, but that certainly seemed like one). Despite this many locals, though far from all, blamed the victim as she was drunk, and both Kasich and especially Attorney General Mike DeWine remain despised in some circles in Steubenville. There were a wide array of complications to this investigation, so it would be completely unfair to claim it was all the fault of football, but it certainly didn't help.[citation needed]

Football is bad for football players[edit]

American football is one of the most injury-prone team sports. One of the most famous injuries occurred on 18 November 1985; Washington quarterback Joe Theismann suffered a career-ending compound fracture of the right tibia and fibula when New York Giants linebacker Lawrence Taylor tackled Theismann from behind and rolled over the back of his lower leg.[note 2]

Since 2013, players and spectators alike are informed of the dangers that players face, most notably, that concussions during the game amount to significant brain damage. A third of former players has Alzheimers or dementia[7]. The league had suppressed that information in the past.[8]

Future of the game[edit]

Since parents may not want their kids to be mentally impaired and this threatens the pipeline for future talent, the future of this sport is now debated[9]. In 2015, a promising young talent retired after only one season, citing concerns about his future mental health[10]. One year later, two more players retired[11].