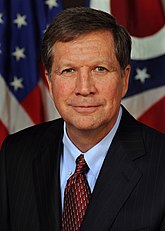 John Richard Kasich, Jr. (1952–) is the former Governor of Ohio who ran for the Republican Presidential nomination for the 2016 U.S. Presidential Election. He was the most popular governor in the country[2] and has a long history of bipartisanship.[3] He's a known policy wonk[4] and fan of the Grateful Dead.

[5] He's been compared to Jon Huntsman[6] (though he's mostly to the right of Huntsman). For the 2016 race, despite his strong record, he is simply too moderate for the GOP - or a RINO, depending on your views. He is known for his passionate hatred for the film Fargo

Kasich has been frustratingly inconsistent in his attitude towards accepting anthropogenic climate change. He accepts that climate change is real and has noted that humans contribute to it but says the extent of human impact is unknown.[22][23][24] He admitted he does not know enough about it and believes "we shouldn't worship the environment".[23] To his credit, he does support taking action to address climate change[22] but does not think the EPA should regulate emissions.[11]

The smoke-filled room is back[edit]

Kasich, who needed 110% of the remaining delegates to win nomination after his lone Ohio primary victory in 2016, made no bones about remaining in the race and driving it to an open convention. Like his predecessor, Ohio boss Warren G. Harding, the two have become a byword for the proverbial "smoke-filled room" selection of presidential nominees. Granted that the other options were Donald Trump and Ted Cruz, and Kasich was clearly more qualified than Harding, this was one of those peculiar cases where blatant corruption would've been a good thing.

Kasich has the distinction of being the last of the Republican contenders to suspend his campaign when he dropped out on May 4, 2016, one day after Ted Cruz.[25]