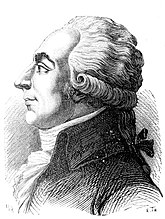 Anacharsis Cloots (1755-1794), originally known as Jean-Baptiste du Val-de-Grâce, baron de Cloots was an orator[note 1] in revolutionary France and a New Atheist long before New Atheism was a thing. Originally born into the Prussian nobility, Cloots spent most of his early life backpacking through traveling Europe, spending his family's money. In 1789, he moved permanently to France and became a naturalized citizen, renounced his titles, and spent the rest of his life embroiled in revolutionary politics before being used as a scapegoat and guillotined by his fellow revolutionaries. His life reads almost exactly like that of a modern upper-middle class anarcho-syndicalist, only before Marx, and in an era when neither atheism nor anarchism was a "safe" opinion to hold.

Although he was primarily known for his fiery speeches, Cloots was also an accomplished pamphleteer. The most coherent expression his philosophy can be found in his Bases constitutionnelles de la République du genre humain and L'Orateur du genre-humain, ou Dépêche du Prussien Cloots, au Prussien Hertzberg.

Cloots was infamous in France for his outspoken antitheism. His publications frequently took the form of parody of popular or influential works of apologetics.[note 2] This strongly anti-religious attitude ended up earning him the nickname "The personal enemy of God".

In a 1793 speech to the Convention nationale, Cloots called for the violent destruction of all religions, claiming that religion does more harm than good and would prevent the establishment of a "Universal republic."[1]

Anacharsis Cloots was also vehemently anti-royalist,[2] and after receiving his citizenship and being voted into the National Convention, voted for the execution of Louis XVI.

Cloots also became an avid propagandist for the revolution. He published a number of pamphlets advocating for a one-world government (under the control of the French) as well as what would now be described as psychological warfare pamphlets to be distributed to other countries (especially those at war

with France) advocating for violent revolution and the overthrow of feudal rulers.[3]

Despite his outspoken patriotism for his adopted country, Robespierre alleged that Cloots was the head of a secret cabal of foreigners bent on overthrowing the French government. Cloots was a relatively high profile individual, whose outspoken atheism and support for a completely secular state contrasted sharply with Robespierre's deistic perspective and the role he envisioned for his Cult of the Supreme Being. Robespierre was thus able to accomplish two political goals by having Cloots executed: he "saved the country" from a foreign menace as well as eliminated an influential orator who could have easily turned public opinion against the Reign of Terror.[note 3]

Cloots largely prefigured what would later become major movements. Aside from the previously mentioned parallels with "new" atheism, Cloots also established the basis for much of what would become Anarchist philosophy.[4] While Cloots is primarily known for his vehement anti-theism and fiery Jacobinism, more modern research has focused on his attempts to broaden the French Revolution beyond an event that affected only France and thereby establish a utopian society.[4]