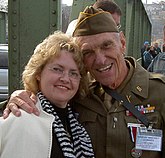 Dr. Anna Rosmus is a German-American historian of the Holocaust who uncovered the truth about her hometown, Passau, Bavaria.[1] Whereas the town's official narrative held that the town's German population harbored Jews and opposed the Nazis, Rosmus discovered that not only did the German population allow the Nazis to murder the town's entire Jewish population, but many Passau Germans were Nazis and took part in the extermination. Furthermore, when she began her research (as an adolescent in the 1970s), she revealed that the people who were community, business, and political leaders in Passau were Nazis responsible for the deaths of the Passau Jews.[2]

Rosmus went on to expose similar myths and uncover the same wrongdoings in a neighboring town, an accomplishment which, when combined with her work in Passau, presents the question, "How many towns in Germany (or Europe) maintain an inaccurate narrative of their experience and actions during the Nazi era?"

For her legitimate, scholarly myth-busting, Rosmus has been the target of all kinds of name-calling, most notably that she is a "nasty girl." And between the death threats she received and fears for her children's safety, she and her family relocated to the United States in 1994 where they have lived ever since.[2] In 1990, Michael Verhoeven made an excellent movie based on her story called, "The Nasty Girl."[3]

This history-related article is a stub.
You can help RationalWiki by expanding it.
Retrieved from "https://rationalwiki.org/w/index.php?title=Anna_Rosmus&oldid=2385489"
Categories:
Hidden category: