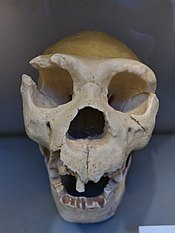 Homo heidelbergensis was a member of the genus Homo that lived throughout the Old World and an ancestor of Homo sapiens.

Homo heidelbergensis are considered to be quite clever for their time. They hunted large animals with hand axes and wooden sticks, butchered meat, and used fire. Homo heidelbergensis also knew how to build simple shelters and may have made tools for some type of ritual which could have included ritually disposing of their dead.[1] H. heidelbergensis is typically listed as the common Homo ancestor of Homo neanderthalensis and modern humans. H. heidelbergensis was possibly a descendant of Homo erectus, or H. antecessor, or H. ergaster, depending on who you ask. Scientists argue over the fine points.[1][2][3][4]

Homo heidelbergensis fossils are found throughout what is called the Old World with some differences between regions. Their bodies were intermediate between late Homo erectus and early modern humans. European Homo heidelbergensis were more compact than others which reduced heat loss in a relatively cold climate. There was a slight sexual dimorphism with males on average just under 6 feet tall while females were not much over 5 feet in height. Homo heidelbergensis brains were smaller than modern human brains and their heads were more like Homo erectus, with a more prominent jaw and brow ridge.

The transition between Homo heidelbergensis and modern humans happened gradually and progressed faster in some areas, notably Southern Europe and East Africa, while other areas did not catch up till later. Creationists can argue about this as they argue about "how come there are still monkeys?" though presumably selective pressures were stronger in those areas where evolution was faster. A population in what is now Kenya apparently became modern humans 150,000 years ago while others in Europe remained as Neanderthals till they died out around 28,000 years ago. So it goes.[note 1][5]