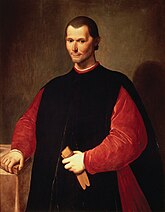 Any similarity to Lord Vetinari is purely coincidental.

Niccolò di Bernardo dei Machiavelli (1469–1527) was an Italian historian, philosopher, humanist, and writer. He lived in Florence, Italy, where he served as a civil servant until his exile under the Medici in 1512.

Little is known about his early life (compared to other Renaissance men), but it is speculated that he attended the University of Florence, where he received an excellent humanist education that would later greatly influence him. His early life falls into the first of the three major periods in his life and correlates with the golden age of Florence under the leadership of Lorenzo de' Medici.

However, it is only after he is appointed as the Second Chancellor of the Republic of Florence do we get a full picture of his life.[1] Machiavelli came to office in the same year as the Medici lost power, and had a successful political career under a free Florentine republic, which lasted until 1512. This is the second period of his life: his political career. Machiavelli conducted many successful diplomatic missions that taught him things that would later greatly influence his work in The Prince. For instance, in his first mission to Catherina Sforza (who is referred to as 'my lady of Forli' in The Prince), Machiavelli drew the conclusion that it is better to trust in the confidence of the people than in fortresses or military strength (a point repeated almost ad nauseam in his literary work).[2]

The Prince is Machiavelli's seminal work and lasting legacy. Written in 1513, The Prince reads like an instruction manual on tyranny - but it seems that Machiavelli's main point isn't to provoke or justify cruel ruling, but to show us that political savviness and bringing glory to the State is inherently at odds with being a morally good person. Written as a gift to Lorenzo, the son of Piero di Medici, The Prince is full of advice for governing a State, and is considered Machiavelli's best literary work in terms of prose and advice, freed from his usual parenthesis and explanatory clauses.

The Prince is a work which basically has one main point. Moral goodness and the glory of the State are mutually incompatible ideas. Alain de Botton notes that "A good politician – in Machiavelli’s remarkable view – isn’t one who is kind, friendly and honest, it is someone – however occasionally dark and sly they might be – who knows how to defend, enrich and bring honour to the state", and Machiavelli writes to get us to understand this.[3]

Machiavelli wrote that while it would theoretically be wonderful for a leader to be both loved and obeyed, he should always err on the side of inspiring terror, for this is what ultimately keeps people in check.[3] As seen in the quote above, many thought it was the duty of the political leader or ruler to be morally upright and behave well with ethical goodness, but "it is precisely this moralistic view of authority that Machiavelli criticizes at length in his best-known treatise, The Prince. For Machiavelli, there is no moral basis on which to judge the difference between legitimate and illegitimate uses of power.

Rather, authority and power are essentially coequal: whoever has power has the right to command; but goodness does not ensure power and the good person has no more authority by virtue of being good. Thus, in direct opposition to a moralistic theory of politics, Machiavelli says that the only real concern of the political ruler is the acquisition and maintenance of power (although he talks less about power per se than about 'maintaining the state')."[1] He pointed out that a ruler who doesn't manage to hold his state together will cause untold suffering to his people through a breakdown of order or conquest by another state.

A fundamental belief among the humanists of Machiavelli's time was that a ruler needs to cultivate a number of qualities, such as justice and other moral values, in order to acquire honour, glory, and fame. Machiavelli deviated from this view claiming that justice has no decisive place in politics, as it is the ruler’s prerogative to decide when to dispense violence and practice deception, no matter how wicked or immoral, as long as the peace of the city is maintained and his share of glory maximised. But Machiavelli did not hold that princely regimes were superior to all others. In his less famous, but equally influential Discorsi sopra la prima deca di Tito Livio (Discourses on the First Ten Books of Titus Livy, 1531), he offers a defence of popular liberty and republican government that takes the ancient republic of Rome as its model.[4]

He asked his readers to dwell on the incompatibility between Christian ethics and good governance via the case of Girolamo Savonarola. Savonarola was a fervent, idealistic Christian who had wanted to build the city of God on earth in Florence. He had preached against the excesses and tyranny of the Medici government, and had even managed for a few years to lead Florence as a peaceful, democratic, and (relatively) honest state.

However, Savonarola’s success could not last, for – in Machiavelli’s view – it was based on the weakness that always attends being ‘good’ in the Christian sense. It was not long before his regime became a threat to the corrupt Pope Alexander, whose henchmen schemed, captured and tortured him, hung and burned him in the centre of Florence. This, in Machiavelli’s eyes, is what inevitably happens to the nice guys in politics. Eventually they will be faced with a problem which cannot be solved by generosity, kindness, or decency because they will be up against rivals or enemies who do not play by those rules.

The unscrupulous will always have a major advantage. It will be impossible to win decently. Yet it is necessary to win in order to keep a society safe. Rather than follow this unfortunate Christian example, Machiavelli suggested that a leader would do well to make judicious use of what he called, in a deliciously paradoxical phrase, “criminal virtue.”

Machiavelli provided some criteria for what constitutes the right occasion for criminal virtue: it must be necessary for the security of the state, it must be done swiftly (often at night), and it should not be repeated too often, lest a reputation for mindless brutality builds up. Machiavelli gave the example of his contemporary Cesare Borgia, whom he much admired as a leader – though he might not have wanted to be his friend.

When Cesare conquered the city of Cesena, he ordered one of his mercenaries, Remirro de Orco, to bring order to the region, which Remirro did through swift and brutal ways. Men were beheaded in front of their wives and children, property was seized, traitors were castrated. Cesare then turned on de Orco himself and had him sliced in half and placed in the public square, just to remind the townspeople who the true boss was. But then, as Machiavelli approvingly noted, that was enough bloodshed.

Cesare moved on to cut taxes, imported some cheap grain, built a theatre and organised a series of beautiful festivals to keep people from dwelling on unfortunate memories.

Could it all be satire?[edit]

There have been suggestions that The Prince is political satire and does not (accurately) reflect Machiavelli's own views.[3] Often lost in the debate over Machiavelli's true intentions is a middle position: that Machiavelli used a satirical tone to make a serious argument. A more common explanation among those who consider The Prince in light of his real political treatise, The Discourses (mentioned above), is that the latter reflects his real feelings about statecraft in general, while the former was something he wrote to try to get a job, and it was slanted toward autocracy because its intended audience was an autocrat.