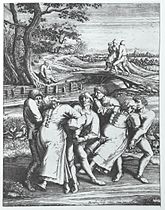 Dancing mania or choreomania was a form of mass hysteria epidemic in early modern Europe. It basically took the form of thousands of people dancing wildly and uncontrollably through the streets until they died or otherwise collapsed from exhaustion.

The breakouts of dancing were once thought to have been caused by widespread psychological trauma due to harsh living conditions; one person would start dancing and the rest, seeking a vent for all their troubles, would follow. However, more recently it has been revealed that that these episodes are best explained as screwball religious sects who gained followers as they made pilgrimages throughout Europe during years of turmoil and hardship in order to receive divine favor. Their symptoms are predictable for any large population engaging in prolonged dancing, emotional worship as well as fasting. Their actions have been mistranslated by contemporary scholars evaluating the participants’ behaviors per se, removed from their regional context and meaning. Tarantism was the name of a regional variant of dancing mania that developed into a local tradition in the most southern parts of Italy.[1]

Episodes of dancing mania are also reported to have happened among the Ainu people.

This history-related article is a stub.
You can help RationalWiki by expanding it.
Retrieved from "https://rationalwiki.org/w/index.php?title=Dancing_mania&oldid=2312814"
Categories:
Hidden categories: