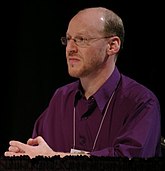 A pasty geek, as he likes to describe himself.

Phillip Plait, better known as Phil Plait, is an astronomer, writer, blogger, skeptic and noted goat aficionado.[1] Plait got his main start in physics and astronomy by working with the Cosmic Background Explorer and the Hubble telescope before moving into the lucrative career of popularizing science and debunking pseudoscience. He was the president of the James Randi Educational Foundation (JREF) between 2008 and 2009. Plait also has a small asteroid named after him (165347 Philplait).[2]

Plait earned his Ph.D. in Astronomy in 1994 from the University of Virginia. After his work with Hubble and COBE, Plait attended Sonoma State University, where he worked on outreach for the Fermi Gamma Ray space telescope, a small lab for gamma ray observation in Low Earth Orbit. Since then, he's appeared in various locations, such as Coast to Coast AM,[note 1] Penn & Teller: Bullshit!, Space TV, and the Yearbook of Science and the Future, published by Encyclopedia Britannica.

In the late 1990s, Plait started Bad Astronomy, a website dealing with, well, bad astronomy — an attempt at correcting misinformation about astronomy in TV shows, movies and print, as well as popular astronomy-related misconceptions (you can stand an egg on its end on any day, not only on an equinox). The website also contained (and still contains) explanations of various astronomical concepts on a popular level and answers to astronomy questions from the readers.

His work on Bad Astronomy inevitably led him towards fighting pseudoscience, conspiracy theories and other fringe ideas. He tackled Fox TV's 2001 Conspiracy Theory: Did We Land on the Moon? special[3] and other Moon hoax claims. He also devoted pages to refuting the claims of Richard Hoagland,[4] Nancy Lieder and Mark Hazlewood's Planet X[5] and James McCanney's "electric comets" bullshit.[6]

Like most websites of that era, Bad Astronomy was a collection of static HTML pages, but in March 2005 Plait started a blog. Originally, the blog was supposed to supplement the website, but soon overshadowed it and in July 2006 replaced the main site. In July 2008, the Bad Astronomy blog was moved under the umbrella of Discover Magazine's blog collective; in November 2012 it was moved to Slate. In February 2017 the Bad Astronomy blog moved to SyfyWire. The old site and blogs are still available online, though they're not updated and the badastronomy.com address redirects to the latest blog. Both the old and the new blogs branched out considerably from the subject of astronomy, and frequently deal with creationism in public education, global warming denialism, and vaccine denialism.

In 2002 Phil Plait collected the material from his website in a book with the same title — Bad Astronomy. It started an entire series on pseudoscience debunking material, including Bad Medicine.[7][8]

In 2007 he wrote Death from the Skies, which explores all the ways outer space is trying to murder us all.

From August 2008[9] to December 2009[10] Plait was president of the James Randi Educational Foundation (JREF). He left the post to work on a secret television project (see below). Plait was been succeeded as JREF president by D. J. Grothe, formerly of the Center for Inquiry. 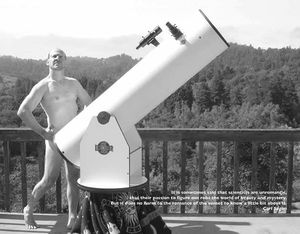 Phil demonstrating what's often held to be the Porsche of telescopes, for some reason.

Bad Universe was a short series of, errmm, documentaries created for the Discovery Channel. It covered approximately the same material as Death from the Skies. Only three episodes were produced:

Like MythBusters, the show made heavy use of explosions and other spectacular demonstrations. Apparently, it didn't pan out well.

The second episode may have been a "jump the shark" moment for Plait, as a segment involving certain claims about space travel and acceleration (g-forces) was not just an oversimplification, but outright wrong and met with a strong reaction in the comments to his blog and elsewhere. Phil claimed that continuous high acceleration was necessary for interstellar travel, which is not true — even an acceleration of 1 g (~9.8 m/s, the standard Earth gravity) is enough for gaining very high speeds very quickly. Speculation is that the segment was added so that Phil could get a joyride on a jet-fighter.[note 2]

Throughout each episode Phil can be heard exclaiming "Holy Haleakalā

As of 2015, Plait works as writer and host for the introductory YouTube channel Crash Course, lecturing on the basics of astronomy in a pedagogical and popularizing manner.[11]

Phil and his wife keep four miniature goats on their property.[12][13]