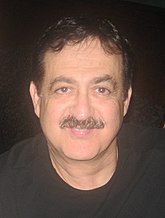 In September 2013, Art Bell returned to the airwaves, somewhat, on SiriusXM Satellite Radio. His new show, "Art Bell's Dark Matter" was broadcast nightly on "Indie", Channel 104, direct from his home studio in Pahrump, Nevada, but abruptly ended in November over web streaming issues.[3] On July 20th, 2015, Art Bell debuted his new show, "Midnight in the Desert", that aired Monday through Friday on the Dark Matter Digital Network from 12 AM to 3 AM EST.[4] This show ended in December 2015, after Bell claimed that he received a string of violent threats to himself and his family.[5] Bell's local sheriff's department opened an investigation, but closed it "due to a lack of evidence".[6]

Signalling a gradual shift of the show's material in a political direction, a frequent news-segment guest in 2020 was Jerome Corsi, a blowhard from the right wing of the NaziRepublican party.

Science fiction author and close friend of Art Bell who took over Art's other show Dreamland. Dreamland is still airing new episodes but is now on a podcast-only format. Whitley claims to have had experiences with what he terms "the visitors" and is a prolific author of both fiction and non-fiction with one of his books having been adapted into a major motion picture starring Christopher Walken.