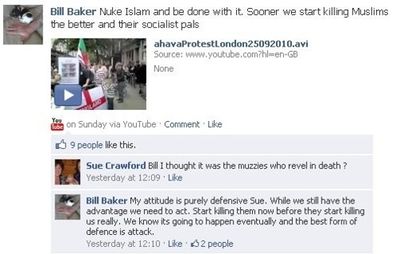 William Richard Baker is a far-right British activist, notable for being so bigoted that not even the English Defence League wants him. He is one of the leaders of a small group calling itself the English Nationalist Alliance.[2]

Although Baker was previously involved with the EDL and helped the group to organise a protest in 2009,[3] the group cut its ties with him and other leading members of the ENA in February 2011. Amongst the official reasons was an incident in which Baker made racist comments during a televised debate with a Muslim.[4][5] Later in 2011 he made the curious statement that "Socialism is being used by Satanists in Islam as a tool to now further the threat of Christianity being replaced by Islam in the UK".[6]

Baker is an English nationalist, as opposed to a British nationalist, and argues that England should leave the United Kingdom, which he seems to associate with Islam and socialism. This stance has led him to make such baffling comments as "Brits out of England".[7]

He also appears to be a fan of arson: Baker has joked about burning down the Cowley Club in Brighton in September 2012, apparently in the belief that drugs are being sold there to fund Islamic extremism,[8] and made a similar comment about an Islamic stall in Barking.[9]

Reportedly, Bill Baker is the true identity of the Anglo-Saxon Foundation member "PersecutedPatriot".[10][11] He is disliked by that group as well, this time for not being bigoted enough: one ASF poster has even called him a "Liberal/Lefty" who may be trying to "swamp England with none white Colonists, invaders, savages, and Turd World run away's".[12]

According to Hope not Hate, Baker is connected to Operation English Vote, a small far-right outlet active on Facebook and Twitter.[13] OEV is itself a part of the New Patriot Alliance,[14] an attempt by fellow ex-EDLer Tony Curtis to unite various splinter groups.[15]