Bill and his wife. You'd be smiling too, if you just scammed an ass-load of cash from God-fearing saps.

Bill Wiese is a con artist real estate agent, Christian speaker, and author of the New York Times bestseller 23 Minutes in Hell. In Bill's book, he claims to have had an out-of-body experience that led him into Hell, where he was tortured and eventually rescued by Jesus, who told Bill to tell everybody of his experience ... preferably in the form of a lucrative book deal and Christian talk circuit tour. 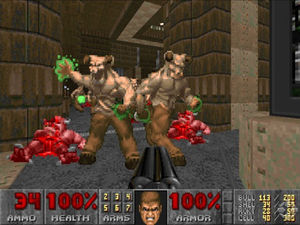 Bill claims that in 1998, at 3:00 in the morning he suddenly was transported to Hell. His description of hell maintains that it was at least 2,000 degrees, pitch-black, and so foul-smelling it bordered on toxic. He also claimed to be physically exhausted, and insanely thirsty. He then maintains that he was sent into a cell, where he was tortured by Mangalores from the movie 'Fifth Element' two massive demons (who, according to a picture he provided, apparently look like clichéd demons from a movie[1][2]) before he escaped only to be found by Jesus, who then saved him and told him to tell the world everybody's favorite doomsday phrase, 'Tell everyone I'm coming soon!'

Afterward, Bill says that he awoke in the living room screaming. Apparently his wife can confirm this, and of course that totally makes it true. Bill then claims that God later gave him another vision in a car when he questioned if his vision was real, and God apparently showed him it was legit. Why God couldn't just do the same for the 7 billion folks in the rest of the world is a mystery, but we're getting off topic....

Realistically, if Bill had simply had a near-death experience, we could forgive him for simply being a misguided individual that unsuccessfully attempted to rationalize a powerful and confusing experience. Bill, however, did NOT have an NDE; in fact, he was perfectly healthy, and quite alive at the time of the alleged vision. He claims to have simply had an OBE, and that God simply pulled him out of his body. Seems legit.....

Unsurprisingly, since said vision supposedly happened at 3:00 in the morning, atheists and many Christians (or, really, anyone who's not totally taken in) alike came to the conclusion that it was probably a bad dream.[3] Bill offers no proof that it was anything other than that, other than saying 'ya just gotta believe me'! Hell, one of his witness 'testimonials' given in his book was a supposed former FBI agent who could 'just tell' Bill was telling the truth. Bill, of course, doesn't mention the guy's name or any other information about the agent, so conveniently no one can contact him to verify Bill's claim (or, more importantly, confirm if the agent in question even exists).

Bill has a habit of going all Bible literalist to point out Hell's existence, and to verify his experience was REAL (emphasis on all caps). To this end, he often quotes Biblical passages concerning descriptions of Hell. This, of course, leads to hilarity once various Biblical contradictions or the many, many issues with taking the Bible literally come into play. This, along with his claims surrounding his experience, has created a divided reaction among Christians. One group believes Bill's claims, thinking (naively) that it's impossible that there would be people who would create lies concerning religious experiences to sell books. The other group has either discredited him as a false prophet (typically using Bible quotes to refute Bill's shenanigans), or have claimed Bill is a liar, once they realized the implications of God's nature surrounding Hell and punishment would indicate a God that wasn't as pleasant as they would like him to be.

Atheists also were on board in noticing that Wiese's version of God made The Big Man out to be a bit of a sadistic dick[4], no matter what Bill says to the contrary.

One would think that after seeing the nightmarish shit-hole that Hell was as described by Wiese (which he said was worse than anything Earth put out; prisons, gulags, concentration camps, etc.), the first thing he would do is go out and warn everybody, using whatever means possible with no concerns over the cost. Bill followed the footsteps of Michelle Smith and wrote a book, 23 Minutes in Hell which would go on to be a New York Times Best Seller, showing the world just how effective (and lucrative) fearmongering can be. Bill had no concerns over the cost all right, the cost of gullible people willing to pay for his drivel.

Bill maintains that he doesn't care if you believe him, just as long as you believe in Jesus, "avoid hell all the same", and buy his books. Honest. Curiously, when asked about what one can do to avoid hell, this was his response:

Thanks for writing. Most of your questions are addressed in Bill’s new book, “23 Questions about hell” which comes with a bonus DVD. If you don’t want to spend the $10-15 for the book/DVD, I’m sure you can read it while at Wal-mart or a bookstore.[5]

Yes friends, for only the low price of $14.95, you too can purchase 'Hell'[6] and get answers to some of the tougher questions surrounding God and Hell!! Also available in Spanish[7].

But Wait!!! Order Now And Receive Both Books, AND an Audio CD!![edit]