The following is a side-by-side rebuttal to the JW.org (the official Jehovah's Witnesses website) document "Blood Transfusions: How Safe?",[1] which exists to provide a health-based defence for the Witnesses' disavowal of blood transfusions. "How Safe" alleges that blood transfusions pose several serious health risks, but uses many outdated publications that are no longer relevant in the slightest. Moreover, the article presents many "scary" truths in order to frighten people from transfusions - without even mentioning the comparable risks of refusing blood transfusions.

Although the document was originally published in the 1990s, JW.org keeps the publication online and presents it without noting that its contents are hopelessly out-of-date. This becomes unmistakably obvious when the actual text keeps using a present tense (and tone) when citing studies from the years 1987-1990. "Radically tubular!", as the kids of today would put it. And just in case you've repressed how much of life's journey you've already zoned out through, please realise that 1987 was 35 years ago. These aren't exactly studies from yesterday; the spring-chicken college sophomores who conducted said studies are likely retired by now.

Overall, the document is a pseudoscientific defense of a religious dogma. On the positive side, it does mean that the Jehovah's Witnesses serve as a useful set of test subjects for synthetic blood substitutes. 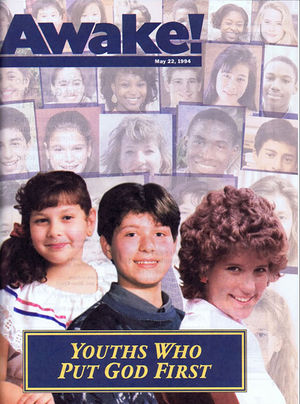 The 22 May 1994 cover of Awake, an official JW publication. The first 15 pages detail the life stories of all 26 children pictured here and how each consciously chose to die, merely because they would not allow a blood transfusion.

According to JW.org, Jehovah's Witnesses (JW) cannot get blood transfusion

without violating the tenets of their official church doctrine.[2][note 1] This doctrine has resulted in unnecessary injury and death. How can the harms of this belief be quantified? First, we must examine the harms of blood transfusion.

Section 606.170(b) of Title 21, Code of Federal Regulations (21 CFR 606.170(b)), requires that facilities notify the Food and Drug Administration (FDA), Center for Biologics Evaluation and Research (CBER), Office of Compliance and Biologics Quality (OCBQ), as soon as possible after confirming a complication of blood collection or transfusion to be fatal. The collecting facility is to report donor fatalities, and the compatibility testing facility is to report recipient fatalities. The regulation also requires the reporting facility to submit a report of the investigation within 7 days after the fatality.

The HHS does note that "[t]he actual rate of adverse reactions is likely to be more than what was reported to the transfusion service."[4] However, these numbers includes both fatalities where "transfusion could not be ruled out as the cause" and where "while there was a temporal link, there was no evidence to support a causal relationship". In other words, these estimates are essentially the maximum possible fatality rate that we know about:[5]

Data on harms on lack of blood transfusions[edit]

In comparison, the May 1994 cover (see above) of Jehovah's Witness publication Awake! lists 26 children (children! no adults!) who died rather than get a blood transfusion.

One (pro-blood-transfusion) Jehovah's Witness source puts the annual death toll from lack of blood transfusions during surgery alone at 900 deaths per year,[18] based on the results of Kitchens 93.[19]


Let's assume that every single infection of Hepatitis B and C and HIV are fatal. Even in this worst-case scenario, only 0.0014005% of blood transfusions recipients die. In other words, even in the best possible light, Jehovah's Witnesses face perhaps 700 times as much risk as non-JWs do.

Jehovah's Witnesses also face vastly increased risks during childbirth[20] -- on the order of 70 times greater.[21] However, the increased deaths from surgery alone are sufficient to prove that refusing blood is far, far more dangerous than accepting it. 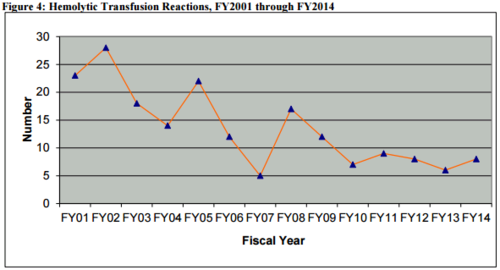 Fatal incidents of Hemolytic Transfusion Reactions (HTR) are low and have been going down. Remember, that number on the left is the actual number -- 0-30 people, not percent or thousand or million.

Goes through the 1994 Awake magazine: