Science was wrong before

The phrase "science was wrong before" (or variations thereof, such as "science has been wrong in the past", "science is only human", or "science is not infallible") is a fallacious technique used in order to reject or disparage a current scientific consensus, especially on topics such as evolution or global warming. It usually works like this:

Usually (or at least often) "science was wrong before" is used to defend the existence of a disproven phenomenon — alternative medicine, perpetual motion, crank theories of everything, faster-than-light travel… the list is really endless for where this has been applied before. The usual examples of science being wrong (like the geocentric worldview that "science" used to hold) were theories that were in no way disprovable at the time, much in the way that string theory cannot be readily disproved at this time. Many alternative medical practices, on the other hand, have been carefully shown to be utterly ineffective in one study after another — no additional information will suddenly contradict these results. When used like this, the "science was wrong before" trope is effectively like suggesting that our observations that gravity is an attractive force are wrong, because one day in the future we might just see something go floating up instead of falling down, and therefore homeopathy works. 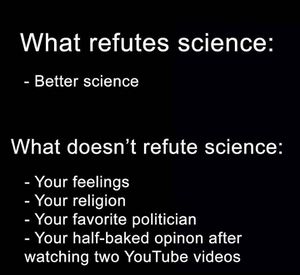 This is pretty easy to understand

The logic behind this argument is fallacious in a number of ways. Primarily it misrepresents how science actually works by forcing it into a binary conception of "right" and "wrong." To describe outdated or discredited theories as "wrong" misses a major subtlety in science: discarded theories aren't really wrong, they just fail to explain new evidence, and more often than not the new theory to come along is almost the same as the old one but with some extensions, caveats or alternatives.[note 1] Often enough, these "new" theories are already in existence and just waiting in the wings, ready for new evidence to come along and differentiate them.

For example, take geocentrism. One of the strongest arguments against heliocentrism was the apparent lack of stellar parallax (or an apparent shift in the position of the stars from season to season). Because there was no evidence, Greek astronomers assumed either that the stars were fixed in the sky (geocentrism), or that they were so far away that parallax was not noticeable. For almost 2000 years there was no evidence for parallax, and it was not until the 1800s that parallax was proven to be correct and geocentrism soundly quashed.

Another example: the quantum theory doesn't explain gravity, but it does not invalidate the Schrödinger equation or the quantisation of energy; it merely says that the current formulation of the theory is incomplete and there are modifications to quantum theory already being formulated, ready for when the next big leap in observational evidence occurs.

That science can be "wrong" in this way is a feature, not a bug, as one of the differences between science and pseudoscience is that science builds upon itself, whereas pseudoscience rails on one claim and doesn't let up, despite evidence to the contrary.[note 2] These pseudoscientists present "science" as a monolithic entity with no differentiation between different sciences and the uncertainties and overlaps associated with each field. For example, an economic study of the minimum wage that uses the scientific method cannot be replicated as easily as, say, a basic chemistry experiment that can be repeated in a lab — like finding the boiling point of a chemical. Thus, the economic study may not be "wrong", but has a lower degree of certainty attached to it than the chemistry experiment. Inability to make this distinction is often the result of the failure to think in a Bayesian fashion, in which the subtleties of errors are more accurately appreciated. Thus the "science was wrong before" argument conflates different types of errors within science, confusing incompleteness of theories with being outright wrong. This, as Isaac Asimov called it in his essay The Relativity of Wrong,[1] is a form of being wronger than wrong.

But more than just being a complete misrepresentation of science, claiming that "science was wrong before" is flawed at even the basic logical level. First, this phrase can be considered a non sequitur or red herring because it usually has nothing to do with the subject at hand. For example, that phlogiston was wrong has no bearing on whether or not evolution is correct, and whether neutrinos may travel faster than light has absolutely no relevance to homeopathy,[2] as that is already governed by a certain evidence base.

This is also a false dichotomy; someone using the argument is apparently suggesting that all science and rationalist thought must be perfectly correct the first time or their selected woo-du-jour must be correct. Using a reductio ad absurdum, the argument can apply to any and all forms of science and technology. (If hypotheses and theories which have been tested time and time again and been proven correct can be "wrong", what does that say about unproven, or even disproven, claims?) Therefore, there would be no way to test the validity of any claims, at all. But no one would say, "I'm not going to drive in a car! Science has been wrong before!" If "science has been wrong", and this disproves the effectiveness of earwax, doubly does it disprove the effectiveness of ear candles.

For these reasons, "science was wrong before" is an objection that is not even wrong, and tends to be used as a last-ditch escape hatch when the crank has run out of concrete objections or talking points.

Failing at even being fallacious[edit]

Oftentimes, extremely factually-challenged (or intellectually dishonest) cranks will spin an urban legend, myth, or misinterpretation of a historical event as a case where "Science was wrong before" .These are cases where not only is the logic flawed, but the "examples" themselves are factually incorrect:

Realism versus anti-realism in science[edit]

While "science was wrong before" is most often used in service of science denialism, though superficially similar, it should not be confused with a traditional argument found in the philosophy of science that is leveled against scientific realism, namely, the pessimistic meta-induction from past falsification of accepted scientific theories, which roughly goes like this: Since our best scientific theories have in the past been shown to be largely false, it is probable that our current accepted scientific theories are in large measure false. Therefore, we ought to be scientific anti-realists.[8] The realist vs. anti-realist debate concerns whether the theoretical entities (e.g. micro-physical particles, fields, etc.) postulated by our best scientific theories correspond to real entities or whether said entities, and the wider mathematical framework in which they are situated, are merely empirically adequate (i.e., computational tools via which we make successful predictions).[9]

Needless to say, this debate in the philosophy of science is much more complex and nuanced than shouting "Phlogiston! Hah, where is your science now?"