Conservapedia:Symmetry between the sun and the moon 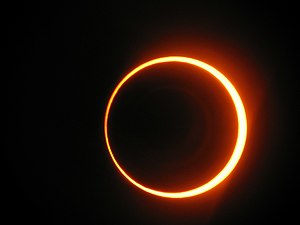 Annular eclipses (like this one) do not happen in Conservapedia's alternate reality.

Conservapedia has this to say about the symmetry between the sun and the earth's moon when viewed from Earth:

To any good little empiricist, this statement should immediately scream "Bullshit!". There are so many moons in our own solar system that at least one is bound to be more or less on target. So a computer nerd made a spreadsheet to look into this for us.[2]

Earth's moon compared with the sun[edit]

We can see a slight variation in the size and orientation of the moon due to a process known as libration.

First, lets get the control defined reasonably scientifically. The orbits of the earth around the sun, and the moon around the earth are not circular, but ellipsoid. This means that these objects will appear larger or smaller depending on the time of year or lunar month.

The figures for the moon are:

And for the sun:

As we can see, the moon spends the majority of its time appearing slightly smaller than the sun does when observed from earth. This difference is pretty small though, with a theoretical maximum of 3.07 minutes of arc, or some 10% of the moon's apparent size.

This alone invalidates the point somewhat, there isn't much in the way of symmetry to be had. The whole thing is pretty silly. If the figures were dead on, they might have somewhat more of a point, but the variability puts this firmly in to the "interesting but unremarkable" category of natural phenomena.

Is this characteristic as unique as claimed?[edit]

The major part of the claim is that the symmetry, such as it is, is unique amongst planets and that the chances of this occurring naturally are essentially zero. Is this claim actually true? Well, lets have a look at some other moons we know about.

There are a number of moons in the solar system that come pretty close to achieving the same "symmetry", considering the number of moons there are this is hardly surprising.

As seen from Jupiter, the following figures apply to the sun: 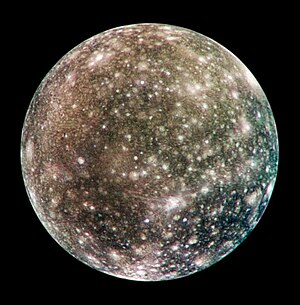 Jupiter has two moons that come very close to being the exact same size as the Sun when viewed from the "surface", such as it is. The first, Calisto, is one of the widely known Galilean group of moons.

Which gives a theoretical maximum of 2.94 minutes of arc larger than the sun in the Jovian sky, which corresponds to some 50% the size of the moon itself. So, while the maximal size differential is smaller in absolute terms, it is significantly larger in relative terms.

However, as viewed from Jupiter, the two sizes would be visually indistinguishable.

The next moon that comes close is Amalthea, which has the following statistics:

Doing the maximum calculations again, we come up with 3.32 minutes of arc absolute which is about 110% relative. This may appear far worse than Callisto, but Amalthea is still relevant to this discussion for reasons that will become clear in a later section, where we discuss the accuracy of these figures.

As viewed from Saturn, the following figures apply to the sun:

Two of Saturn's moons come within a minute of arc of being the same size. Both have fairly regular orbits at almost the same radius. The more massive, Janus, has the following statistics:

So, doing the maximum calculations we determine that in absolute terms Janus appears 0.9 minutes of arc larger than the sun in the Saturnian sky. In relative terms, this is some 25%. The best match so far!

Another contender that comes close Epimetheus. This moon weighs in with the following stats:

Giving absolute and relative maxima of 0.97 and ~33% respectively. Not quite as good as Janus, but still visually indistinguishable from the Sun.

OK, so we have four moons around two planets that come pretty close to matching the size of the Sun in their respective skies. Is there a moon in the solar system that actually does match some of the time? Why yes, of course there is.

As seen from Uranus, the sun has these statistics:

Our wonder moon is called Perdita. It's an unremarkable little chunk of rock, discovered in 1986 by the Voyager II probe but not confirmed until 2003. Here's the vital statistics:

That's so close that it's well within the margin of error of radius measurement of the moon, and of course the rounding errors in the figures used. It goes without saying that there's no way in hell you could judge which object is the larger with the naked eye.

It's worth noting that exoplanets that have been discovered so far tend to be large and very close to their stars. This would mean the apparent size of their "sun" would be huge - and as a result for a moon to display such symmetry it would either have to be almost equally close to its parent planet, or huge. However, this fact is thought to be entirely due to a bias in the search methods for exoplanets, which detect large, and close planets more easily. As the sensitivity of the experiments improves, it will probably become apparent that our own solar system and distribution of planets and moons is typical. Given there are two moons that display the same attribute in our own system, doesn't it seem likely to be repeated elsewhere?

A note on the accuracy of these figures[edit]

These figures are necessarily rounded, so some error comes from that truncation. A more interesting source of error is the way we deal with the radius of planets, though. In these calculations the planets are treated as point masses. This saves much argument, considering the absurdity of "standing on the surface of Jupiter" for example. However, if we actually take the radius of the planet into account, this helps the case for the smaller moons Amalthea, Epimetheus and Perdita. With planetary radius considered, Perdita is bang on, and Amalthea does better than earth's moon on our crude symmetry metric.

So, what of the original claim? Lets divide it in to two parts:

So, yeah. Pretty much Bullshit.

Is our moon remarkable in any way?[edit] 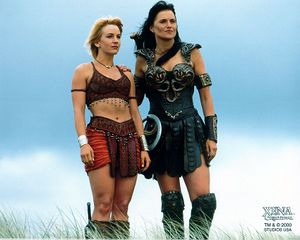 Gabrielle orbiting Xena: A study in the size of celestial orbs.

Not really. It's singular, but then again Eris appears to have only one moon too, which we all should refer to as Gabrielle.[5] Judging by the other planets in our system, that probably puts us about in the 40th percentile for number of moons amongst planets of our mass class. Other than that, it's just a moon, [6] Still a beautiful, romantic and inspirational one.