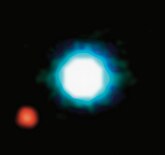 An exoplanet is a planet orbiting a star other than ours. Rogue planets

, planets that drift through deep space instead of orbiting a star, also exist.[1]

History and current state of knowledge[edit]

The first exoplanet discovered was found orbiting a pulsar, PSR B1257+12, during a 1993 study led by Alex Wolszczan of Pennsylvania State University. It wasn't until 1995 that Michel Mayor and Didier Queloz of the University of Geneva confirmed an exoplanet around a main sequence star, 51 Pegasi.

As of August 6, 2019, 4,103 planets in 3,056 planetary systems (with 665 multiple-planet systems) have been found.[2] Most of these exoplanets are gas giants; this is most likely due to the limits of current detection methods. Some rocky planets have been found as well. Unlike gas giants, rocky planets may, given the right conditions, be able to sustain life.[3]

Currently, the most notable of these rocky planets is the relatively nearby (20 light-years) planet Gliese 581c. Of all the known exoplanets, this one comes closest to being capable of sustaining life,[4] though its existence is disputed.[5][6]

Astronomer Jay Farhi suggests that pollutants in the atmospheres of white dwarf stars may be from either defunct asteroid belts or shattered rocky planets.[7]

There are estimated 100 billion planets (or more) in the Milky Way alone. There is definitely other Earth-like planets out there somewhere.[8][9] 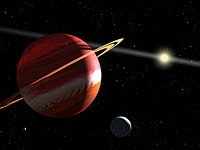 is a star system 10.5 light years away from Earth. It is an orange dwarf star approximately 850 million years old. There are currently two confirmed planets in the system: A Jupiter-sized planet orbiting outside of ε Eridani's first asteroid belt, and a Saturn-sized planet at about the same distance from the star as Pluto is from the Sun. It is expected that more planets will be found in the system within a decade when there are better telescopes.

Many scientists cite the number of exoplanets and their rate of discovery as evidence that Earth-like planets, and eventually extraterrestrial life, will be inevitably found. Critics of this view are quick to point out that all the planets so far found certainly don't support this conclusion — as all known exoplanets orbit too close to their star or are gas giants. However, the search for exoplanets is subject to a high degree of selection bias. All the methods outlined below lead to a huge tendency to find large or closely-orbiting planets. With the transit method, large planets produce a more easily observed signal; with astrometric methods, more massive planets that orbit close to their star will exert a greater force and be more easily seen. As technology improves, smaller planets and more distant planets are being discovered. While it is yet to be confirmed that our own solar system is typical, the selection bias means that exoplanets are not yet strong enough evidence to say that the solar system is unique or part of a special creation.

It is important to note that, despite news that often announce the discovery of habitable planets such as Proxima Centauri b (yes, around the closest star to our Sun), Kepler-62f, Kepler-186f, and a growing number of others, we just know there is a planet (sometimes more) orbiting a given star and depending of the method used for its detection (radial velocity measurements or looking for transits in front of its home star) just its minimum mass (depending of how inclined is its orbit respect to us, usually unknown) and its radius respectively,[10] as well in both cases that, according to our climate models, at that distance temperatures allow liquid water to exist. We do not know if those planets are actually more or less Earth-like (thus habitable for us), Venus-like (or not so Venus-like) hells or worse, something in between, or exotic worlds that look like as if they came from a science-fiction work (much less if there is life on them); at best we can use climate or geological modelling to attempt to deduce what kind of conditions could be expected to be found there, that it would not be strange that turned out to be wrong as we've just a couple of worlds close enough to study them in detail (in our Solar System, of course) and our models are based on extrapolations of what happens there.