DMSO (dimethyl sulfoxide), a by-product of paper manufacturing, is a solvent that rapidly penetrates the skin and has the ability to carry other substances with it. This property led to its being studied from 1963-1965 for several potential medical uses. 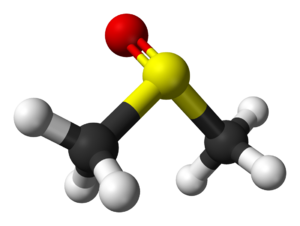 The U.S. Food and Drug Administration halted tests on DMSO in 1965 over safety concerns, but during that time it became a short-lived alternative medicine fad, with the usual claims that it was a new wonder drug. DMSO advocates continued to promote it and criticize the FDA for "suppressing" it, and it again became an alternative medicine fad starting in the late 1970s, which still persists today. A number of claims have been made about it by proponents, including that it can heal arthritis by removing "toxins" from the skin and muscles, or that it has anti-aging and anti-inflammatory properties, or that used in conjunction with anti-fungal medications it makes those medications more effective in difficult areas (such as toenails). It is applied topically.

It is sold legally only as an industrial solvent (although some "health food" stores carry it), and is illegal to sell as an over-the-counter medicine. It was approved by the FDA only for limited veterinary use, and by prescription for treatment of interstitial cystitis, a bladder condition, in humans. Self-treatment with industrial-grade DMSO carries a number of safety concerns, including that the industrial-grade DMSO often found on the market is not pharmaceutical-grade (d'oh!) and may contain contaminants like other chemicals and bacterial toxins which the DMSO transports into the bloodstream. Side effects of such use have included skin rashes, nausea, and possible links to glaucoma. It also makes your breath reek of garlic. DMSO is often an ingredient in the quack cancer cure Cansema.[1]

DMSO is an effective paint stripper.

DMSO is used as an aprotic polar solvent when no other solvent will cut it, but most chemists prefer to avoid it, because its high boiling point makes it very difficult to remove. Deuterated DMSO (DMSO-d6) is often used as a special solvent for polar compounds in nuclear magnetic resonance spectroscopy (NMR).

DMSO has a very low viscosity and high solubility, making it the diluant of choice when dealing with extremely small quantities of liquid in a laboratory. If you were to try to pipette a water-based solution in to a 1536 well microtiter plate the height of the meniscus would throw off your measurements; using DMSO instead of water gets around that problem.

DMSO serves to make illegal drugs like cocaine more soluble, so that they can be absorbed through the skin or mucuous membranes.

According to Quincy, M.E., a forensic show that pre-dated CSI by two decades, you can also use DMSO to totally kill somebody by mixing it with snake venom and smearing it on their steering wheel. RationalWiki does not recommend you do this, however, as it would constitute murder, which is a crime in several states.

However, if you insist, then as good rationalists we can only emphasise the importance of personally gathering empirical data. Test the method on yourself first; if the results are as intended, then you will have already solved the underlying problem.