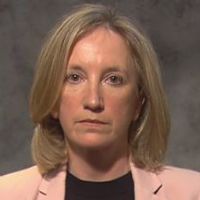 Gemma O'Doherty is an Irish conspiracy theorist, anti-vaxxer, racist and moron. She's been banned from YouTube for hate speech. After her ban, she protested outside Google in Dublin trying to get her channel reinstated. Google took no notice, but she did piss off the residents in the area.[2] She now thinks that the coronavirus is a cover for people getting sick from 5G, and she goes around Dublin filming what she calls 5G masts, and staging protests against high-speed internet access.[3]

She actually started out as a legitimate investigative journalist for right-wing The Irish Independent newspaper back in 1995, focusing on the Irish criminal justice system and the Irish police, the Garda Síochána. Two stories she investigated were the 1985 Death of Niall Molloy

in 2010, which led to that case being reopened, and in 2015 to the conclusion that the case was correctly decided, and the penalty points scandal

in 2013, which led her to be fired from her erstwhile newspaper and, ultimately, to her winning both unfair dismissal and defamation cases.

After that, she became a freelance journalist. Her first piece was a YouTube documentary on the Disappearance of Mary Boyle

, where she implies political interference in the investigation. In 2017 and 2018, she also published articles for left-wing Village newsmagazine about long-term child sexual abuse in Tenerure College, Dublin, especially regarding the college's rugby coach, John McClean, who would be formally charged in 2019.

Not that she was without her critics. Journalist Michael Clifford, for one, mentioned that most of her work at the Irish Independent actually "involved feature and travel writing" until 2010, and that some of her investigations were "replete with innuendo and theories of conspiracy".[4] In 2019, Village magazine published an editorial about her and her journalism for said magazine. The magazine stated that they stand by it, saying that they never saw any of her conspiratorial or bigoted opinions on her work or conversations with her, and that she was no longer welcome on the magazine now that she revealed herself to be a bigot.[5]

supermarket chain ran an advertising campaign across Ireland featuring real Irish families (i.e. not actors) and showing how much money they save by shopping at Lidl. One of these families, the Ryans — a mixed-race couple with their 22-month-old son from County Meath — was featured on billboards across the country. On seeing the advertisement, O'Doherty immediately took to Twitter with this nonsense:

German dump @lidl_ireland gaslighting the Irish people with their multicultural version of ‘The Ryans’. Kidding no-one! Resist the Great Replacement wherever you can by giving this kip a wide berth.[6]

Twitter later removed the offending tweet but did not immediately ban O'Doherty. The great replacement squad (Gemma's little lemmings) was out in full force, giving the couple extremely racist abuse online, with one person making death threats against them and their child. The family ended up leaving the country.[7]

O'Doherty, as well as being a conspiracy theorist, is also a wannabe politician. In 2018, she ran for the position of president on an "anti-corruption" ticket, despite the president not having anything to do with corruption (in Ireland the office of President is a ceremonial role, a figurehead). Her campaign was based on the conspiracy theory that the government was compliant with the murder of the celebrated investigative journalist Veronica Guerin

. This made the Guerin family very angry, who stated they want nothing to do with O'Doherty.[8] Nevertheless, she failed to get enough support for her candidacy, by only getting the backing of one county instead of the minimum four, namely the rural Midlands county of Laois.[9]

O'Doherty has continued trying to be a politician in both the Dáil parliamentary and European elections, usually based in the Fingal area of the Dublin Region. This is done under the banner of her political movement "Anti-Corruption Ireland" [10] which, ironically, has very little to do with corruption and just codifies her conspiracy theories. Despite Ireland having an electoral system which is more favourable to independent politicians, she has failed every time to win against more mainstream candidates.

During the COVID-19 pandemic Gemma O’Doherty brought a High Court challenge against the Irish government with John Waters, aimed at striking down the emergency coronavirus laws.[11] A judge ruled against their application for judicial review and ordered that they pay legal costs.[12]

As of Friday, July 31st, 2020, O'Doherty's Twitter account has been permanently banned due to "...repeated violations of the Twitter rules." [13] According to Twitter, these violations included violations of its abusive behaviour and sensitivity media policies (read as: "She was just being such a massive cunt, we had to do something to shut her up").[citation NOT needed]