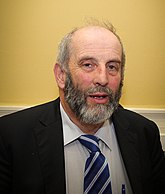 Danny Healy-Rae (1954–) is an Irish politician, businessman and wingnut from County Kerry.

Like many European countries, Ireland doesn't have much of a religious right like the U.S has nowadays. Historically, the Church was very powerful in Ireland and ran the country like a quasi-theocracy, but nowadays it has very little power in Irish politics. Ireland's right-wing parties, the biggest being Fianna Fáil (a party that previously had a great deal of support from the Church) and Fine Gael, are socially liberal, while also being fiscally very conservative at the same time. However, there's an exception to every rule and Danny Healy-Rae is the most famous example of this.

As for Danny himself, he comes from the Healy-Rae political dynasty and was first elected to the Dáil (Ireland's house of parliament) in 2016.[2] He also owns a pub in his constituency, which we're sure has nothing to do with his stance on drink driving.

Healy-Rae has been fairly vocally opposed to Ireland's carbon tax and has even gone as far as denying climate change. Now while there is a legitimate argument that the companies that are responsible for most of the world's pollution should be the ones paying for it, this is not the argument he's making. During a debate on climate change in the Dáil, he said that "God above is in charge of the weather and we here can't do anything about it." This led to some serious ridicule and him being compared to Sarah Palin.[3] Interestingly enough, by believing this, Danny is essentially denying papal authority as Pope Francis has taken climate change very seriously. He'd outdo himself quickly after this though, claiming in another Dáil hearing that the hole in the Ozone layer was caused by nuclear testing. His source for God controlling the weather? Noah's Ark, of course!.[4] As for the nukes claim we don't know where he got that from but we think we can make a fairly good guess.

In what should come as absolutely no surprise to anyone, Danny is a social conservative. He is anti-abortion, and is also opposed to same-sex marriage and same sex adoption, arguing that "What I was very worried about – and still am – is that two men, or two women, could adopt a little baby girl or a little baby boy and these babies would have no say in it."[5] He clearly seems to omit the fact that the same logic could be used to argue against adoption by straight couples since babies are incapable of choosing to have straight parents either.

On driving under the influence[edit]

This is the part you were waiting for, isn't it? Healy-Rae made international headlines after a German documentary described his campaign to loosen Ireland's anti-DUI laws[6] and attempt to return to the good ol' days — when you could have 2 pints and drive down a pothole-filled country road near the edge of a cliff, and the guards[note 1] could do squat to stop you. To Ireland's great embarrassment, 2 million Germans watched this documentary when it aired. We here at RationalWiki can't stress this enough. Don't drink and drive.

Healy-Rae's drinking and driving campaign raised awareness of the problem of rural isolation. Because of decades of funding cuts rural public transport in Ireland is very terrible, and because of this many older rural people can't socialise without the fear of having an accident or being arrested for drink driving. The joke at the top of the article notwithstanding, his heart was at least somewhat in the right place here.

He has also came out in favour of allowing priests to marry, making the argument that it would encourage more people to become priests.