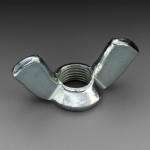 A typical wingnut, sporting an attractive bright zinc plated finish. Note that the right wing is diametrically opposed to the left wing, but otherwise identical.

A wingnut is a specialized, convenient item of hardware.

Like a normal nut, it has threads on the inside to engage the threads on a bolt or stud. However, instead of flat faces that must be engaged with a wrench (or Mr. Goodpliers), a wingnut has (typically) two large "wings" that allow it to easily be tightened or loosened with the fingers. Unlike some nuts, squirrels don't have much of an appetite for wingnuts (they find them tasteless, and hard to swallow).

Wingnut is also a snarl word referring to anyone whom the speaker considers unreasonably far to the right, analogous to "moonbat" - mostly by those on the left, but also some people of faith (especially Christians) have used it to refer to batshittery within their own camp — mostly for the religious right and creationists.

Being a wingnut requires a particularly paranoid worldview, teetering on the edge of or falling wholesale into tinfoil hat territory, as wingnuttery causes the victim to refuse to accept any source of information that doesn't back up their prejudices (essentially, wingnuts are almost always authoritarian as well as being politically right-wing). Constant gibbering about the "liberal media" as well as a slavish devotion to cognitive dissonance, conspiracy theories, global warming denialism, COVID-19 denialism, psychological projection, and crackpot theories of economics (e.g. Austrian school, Social Credit) are also, if not required, at the very least nearly universal symptoms. This is all usually accompanied by a side dish of a severe persecution complex. Not all wingnuts are racists, misogynists, homophobes, or transphobes, though many racists, misogynists, homophobes, and transphobes are also wingnuts.

Unfortunately, in the United States, that seems all the more common every day.

This politics-related article is a stub.
You can help RationalWiki by expanding it.
Retrieved from "https://rationalwiki.org/w/index.php?title=Wingnut&oldid=2452339"
Categories:
Hidden categories: