The face that ushered in brain cell damage in the trillions. And counting.

Sarah Failin' Palin (11 February 1964–) is the former Republican Governor of Alaska, a beauty queen, reality-TV star, and prime example of how well abstinence-only education works. She was the youngest Governor in Alaskan history, the first to be born after Alaskan statehood, and has damaged the state's public image more than any other person in recent memory.[2] In 2016, she was offered an opportunity to become a Swamp Monster in Trump's cabinet, most likely as Secretary of the Inferior.[3]

On August 29th, 2008 presidential candidate John McCain selected her to be his running-mate (the Geezer and Gidget ticket),[4] despite the fact that she didn't really know what a Vice President does.[5][note 1] She supports teaching creationism alongside evolution in biology classrooms,[6][7] and came prepackaged with scandal.[8][9][10]

Palin is widely and appropriately ridiculed by 2/3rds of American society, who accurately point out that she's a fool and that her opinion on any issue is the last one anyone should ask for. However, there's a certain subset of conservatives who shun all media outlets and honestly believe Palin was sandbagged by mainstream media for being conservative, and no other reason. Among those types of voters, Palin's lack of credentials can only be an endorsement. She was instrumental in electing Sen. Ted Cruz in Texas,[11] gave the kiss of life to Rand Paul's moribund Presidential campaign,[12] and, more recently, has allied with Donald Trump.[13]

Was it a good idea?[edit]

She had an 89% approval rating in Alaska before being tagged for VP. She was literally the most popular governor in America.[14] She likely could have served two terms, and maybe switched to be a senator when she was done. She was beloved in Alaska but ridiculed by most of the country, meaning that she went too far. Palin did draw substantial criticism from staunch conservatives in Alaska for her perceived populist economic policies, including significantly raising taxes on oil production, subsidizing a new gas pipeline with public money, and advocating $1,200 energy supplements.[15] (In point of fact, it was the largest operating budget in Alaskan history.) Bill Moyers even invited her onto his PBS show to talk progressive politics. It remained to be seen how this would affect her standing with conservatives in the long run, but she did have a future.

And less than 2 years of experience as governor.

As Barack Obama chose Joe Biden for his vice-presidential running mate due to his experience in foreign policy and the economy, and his attack-dog credentials, Senator McCain presumably chose Governor Palin in order to bring youth to the campaign. But this was apparently her only benefit. It worked for about a week when all she did was wave and give prepared speeches. Then they let her answer questions. If you're going to pick someone who is utterly unqualified, you should at least have a plan to protect her from the sharks. Some McCain insiders, however, blamed Sarah for digging in her heels and resisting attempts at vetting her. Before long, she had usurped her own campaign manager, Steve Schmidt.[16][17]

Some would say that her gender was a benefit to McCain in order to pander to Hillary Clinton supporters, but her anti-abortion stance didn't impress most of them, especially the female voters. Also, her touted "environmentalist" status was severely undercut by her support of oil-drilling in the Alaskan wilderness. And while Obama had only a few years of political experience under his belt, Palin had only been in state government for twenty months, making her even less experienced than he, and causing the Republicans to lose their biggest advantage. If a hypothetical President McCain had died in office (he would have been the oldest ever elected) she would have had to take over as president.

In a mea culpa, Schmidt told Chris Matthews that he's sorry about this whole Palin thing — turns out she's a complete "freak show" and has ushered in a slow, painful death for his once-esteemed and respected political party.[18]

In July 2009, Palin announced her decision to resign from the governorship of Alaska, in order to take up community organizing (irony!) to ready herself for a run for the Presidency in 2012 and begin a career as a Facebook blogger. (That "How's all that hopey-changey stuff working out for ya?" line is an all-time classic[19]). She later decided she wouldn't run, eliciting anguished moans from the political-comedy community.[20]

Palin still has a strong following in the Tea Party movement. It was actually Sarah Palin who accredited the Tea Party's existence to Obama which was, like most things that come out of Sarah Palin's mouth, mindless drivel.

Her initial endorsement of Trump was a doozy; he dragged her out once during the primaries, and she rambled so much that they never let her out again.

Palin and the "new" feminism[edit]

If, during the election, one had read only GOP-supporting blogs, one might have thought that female voters were flocking to Palin, as a woman who does away with the old feminist views, showing what can be achieved without affirmative action.[22][23] These people were wrong: the political rally "Alaska Women Reject Palin" was larger than the pro-Palin homecoming rally the week before.[24] Also no one could possibly support anyone who would charge a rape victim for the processing of the "crime scene" analysis known as the "rape kit."[25] That was the policy in Wasilla when Palin was mayor and she did nothing to change the policy.[26]

It also remains inconceivable to some True FeministsTM that a "feminist" can hold the position that women are legally, morally, ethically, intellectually equal to men while still saying that if raped, they must have the rapist's child. That's hardly an equality; hell, it's an oxymoron.[note 2]

By bringing Trig Palin into the world, chromosome problems and all (a prenatal exam determined Trig had Down syndrome), Sarah's life speaks directly to women who have been told they must decide between having children and having success. What she says is if you are successful and reasonably rich, you can demand that others make their "choices" in the way that you insist are the only "choice."

After the election there was talk that Palin might be under consideration for important posts in the Republican Party in the future. If this happens, American voters should be well aware of what she wants to do.

In 2022, Palin decided to step out of irrelevance and get back into the national spotlight. She has announced her intention to run to represent Alaska in the House, and has earned Trump’s approval.[27] She tried to run in the special election for Alaska's at-large congressional district to replace the late Don Young,

than have Sarah Palin representing them.[28] Still, she gets to try again in November, and time will tell how that turns out. 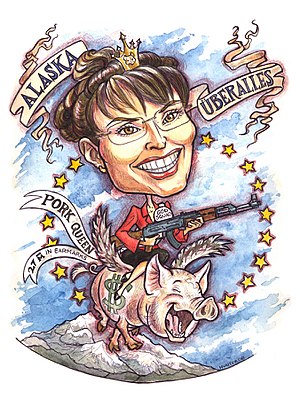 Hope and change will soon go away, I will be führer one day.

Trying to stay relevant in the post-Trump kookosphere world, Palin proclaimed in 2021 regarding the COVID vaccine, "It’ll be over my dead body that I’ll have to get a shot. I will not do that. I won’t do it, and they better not touch my kids either."[35]

Sadly, Sarah Palin's Jewish problem doesn't end with the "blood libel" remarks. American Jews are by now somewhat used to (but no less displeased with) being fetishised by American Christian Rightists, but Sarah Palin has taken it all the way to cultural appropriation and beyond. There have been many sightings of her flat out wearing the Star of David publicly.[51][52][53] The problem is, Sarah Palin isn't Jewish. She has expressed no desire to convert to Judaism, she doesn't participate in the Jewish community, and she has not revealed any Jewish heritage. It's just effed up, Sarah, and it would be really nice if you quit this crap.

Like most high-profile politicians, Sarah Palin isn't free from the occasional conspiracy theory. For example, as the flipside to the Birtherism movement, the Trig Palin birtherism or Trig Truther movement alleges that Trig Palin is actually the son of Sarah Palin's daughter Bristol, and Sarah Palin had claimed him as her own to save face for her then-unwed teenage daughter as well as solidify her anti-abortion position.[54] Led by blogger Andrew Sullivan and revived in a genuine academic paper blog post dressed up like an academic paper by an NKU professor,[55] the movement hinges on the fact that Sarah Palin didn't look pregnant in her photos leading up to the birth of Trig, including several showing her with a "really flat stomach."

This is fairly readily dismissed; not every woman swells like a balloon to the point of uncoverability when pregnant, even as late as seven months, and it can be difficult to discern three-dimensions from a two-dimensional photograph (which can be further complicated when you've got reasons to believe something meaningful is there). On top of that, like most conspiratorial cover-ups, a cover-up of that level would require cooperation between a large number of parties from both sides of the political aisle, including journalists and people who would gladly see her reputation crumble, stretching from before her rise to fame.[56] Consider how readily critics and satirists railed against Palin during her peak years for less -- is it reasonable to believe they would readily ignore something so controversial? To quote journalist Steve Quinn, who had confirmed her pregnancy prior to Trig's birth:

Another complicating factor involves Bristol Palin herself. Just eight months after Trig's birth, Bristol gave birth to her son, Tripp Johnston, on December 2008. Not only does this put the claim that the cover-up was for Bristol to save face into question as she was still unwed,[57] but it also places very strong doubt on the timeline proposed by the truthers. Despite the shortened window, there is no indication that she had her child prematurely or in some other manner that necessitated cutting the pregnancy short.

It is a well known fact Sarah Palin is a master debater.

See the main article on this topic: Irony meter

Not unlike so many things in and around the world of fundamentalist Christianity, Ms. Palin launched attacks against Obama that rather push the limits of Irony Tolerance.TM

Some wingnuts who got the Sarah Palin Stamp of ApprovalTM